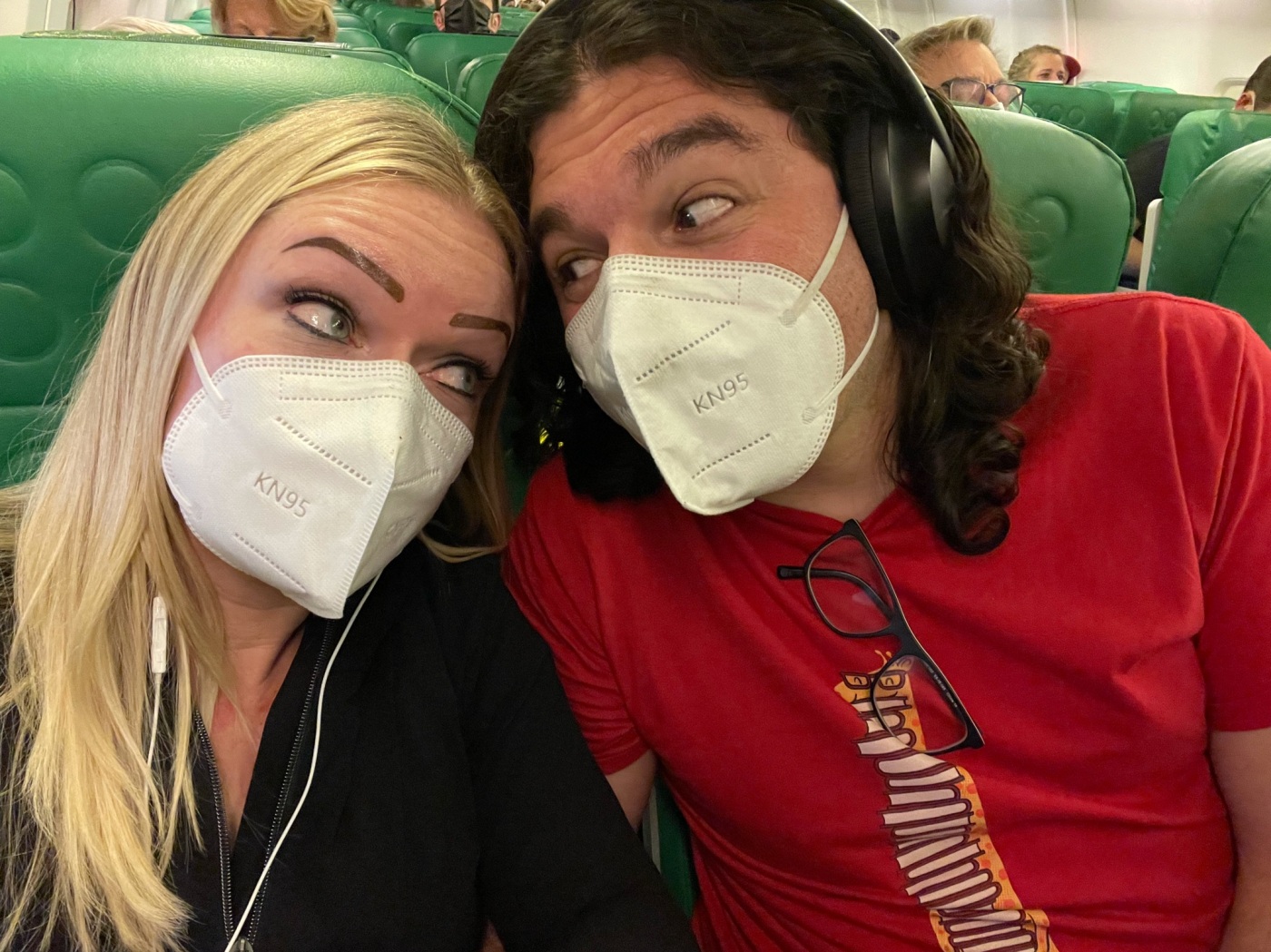 We had been told by many that Lisbon is nothing like the Algarve Coast, that it is more cultural and historic.  We had also been warned by many that the hills are steep and the paths are made of cobblestone.  All of this was correct.

We hadn’t been on a European train in three years, so the excitement of boarding our train from Albufeira to Lisbon was invigorating.  We arrived plenty early and waited until the scheduled departure time.  But, the train never came.  It took a few minutes for me to realize that we were at the wrong train station.  Ugh.  Now what?  The next train wasn’t for six hours.  We tossed around a few ideas before asking the ticket clerk, who explained that the same train we thought we were on was stopping through our station in just 15 minutes.  He allowed us to board, and just like that, we were on our way.

Our AirBNB in Lisbon was at the top of a hill, and just meters walking distance from each of the major sites.  This is great, we thought!  We dropped our bags off and turned right out of the AirBNB.  It was just half a block of cobblestones and a giant incline upwards.  It took no more than a few seconds for us both to come to the conclusion that we would just have to spend some Euros for taxis and tuk tuks.  This was not a city we would get to enjoy by foot, which by the way is one of my most favorite ways to see a new place.  I guess sometimes you win and sometimes you lose. I was, after all, in Portugal…

Our first tuk tuk took us to the Ribeira Market, or Time Out Market, where we had some more Pasteis de Nata and marveled at all of the food in this glorious food hall (definitely recommend this!).  From there, we ventured over to the Rossio Square which is likely the most famous square in Lisbon.  We had a snack overlooking the square and enjoyed people watching, which is part of the reason the square is so famous.  It was here that Tony was approached several times by locals asking if he wanted to buy some hashish.  Hilarious how they were not incredibly discreet but also how clear it was that the drug they were selling was being sold illegally.

We visited a local market that evening followed by a pizzeria.  The walk home was a block and half and we couldn’t locate a taxi, so up, up, up we went, stopping every few feet to catch our breath.

Our AirBNB had windows on each side with a subtle breeze coming in off the Tanges river that flows through Portugal.  I suggested we keep the windows open – partly because I wanted to feel the Mediterranean air, but mostly because I didn’t want to run the air conditioning and add to the ongoing climate issues we are experiencing.  It was glorious…. until around midnight when I woke up with at least a dozen mosquito bites on my arms, shoulders, and face.  For four hours, I attempted to chase a very tiny insect, in the dark, with no success.  The next morning, as we were about to leave, I found the little gal on the wall, full of my blood.  Ugh.  Needless to say, I learned a lot about mosquitos during my restless four hours of sleep and unplanned research on bugs.

The Belem Tower sits along the river in Lisbon, so the area itself is very flat.  While we couldn’t visit inside of the tower due to reconstruction, we were able to view it and enjoy the flat surface surrounding it.  We were even able to walk to the Padrao dos Descobrimentos (a monument dedicated to discoverers) and the Jeronimos Monastery from here, which was a nice change of pace from our taxis.

We enjoyed a funicular which cost about 3-4 euros, and another must do.  Similar to the trolleys in San Francisco, the funicular is a train car that sits on rails and brought us up roughly 15 blocks of a straight incline.  It was at the top where we met one of Tony’s friends who happens to live in Lisbon.  It really is a small world.

We wondered some more, just exploring the teeny tiny streets, and happening upon random places.  One of my favorites was the World’s Oldest and Still Operating Bookstore.  Seriously, that is cool.

Sintra is a 45-minute train ride from Lisbon.  And up to this point, it was my most favorite part of Portugal.   The train ride itself was pretty, but the town was the cutest ever.  The city center (if you can even call it a city) was windy, just a little hilly, and sat in the valley of a small mountain range.  There was a large palace off to the distance on one side, and another very colorful palace on the other side of the city, perched on top of a hill.

Our tour guide that day, Pedro, was outstanding.  We found him along the street as we were walking the town, and for a fee, he took us in his tuk tuk to the top of the mountain where the very colorful palace was.  The structure itself was red, green, and yellow (or gold).  The colors of the Portuguese flag but also representations from the countries the castle was built to represent.  We did not go in as it was suggested that there would be flights of stairs throughout, but what a cool experience.  Driving a tuk tuk to the top of the mountain to see a castle.

Fatima is located about halfway between Lisbon and Porto (our final stop in Portugal).  And while I am most definitely not religious, it felt like something we needed to see.  According to the Catholic Church, Our Lady of Fatima appeared to three shepherds starting in 1917.  The town itself has been built around the church and the original sighting place of Fatima.

So another train ride, a 30-minute taxi ride, and we arrived at the church.  As expected, it was large and grand.  There was an incredibly large viewing area outside for the public masses that we assumed are held frequently, and another area off to the side where individuals could light candles for their prayers.  There was also a museum and a ceramic path that was probably close to a half mile where individuals could begin the path of walking on their knees towards the church.  We saw several people doing this, all with rented knee pads on.

The town itself had become quite large with several hotels, restaurants, and shops.  Keep in mind that 100 years ago, the entire town of Fatima was just a field.  Until she appeared to the shepherds, there was literally nothing in Fatima.  In fact, it wasn’t even a town.

We snapped some photos and took in the place.  We grabbed a taxi back to the train station out in the middle of nowhere where we ended up waiting for three hours; there are few trains in this part of the country.