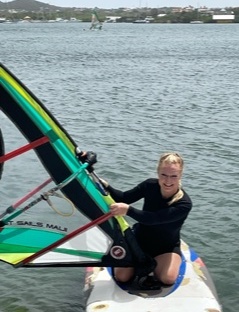 Bonaire might be my favorite Carribean island.  It’s small – something like 12 miles across – with just one little village.  It’s an island surrounded by coral reef, so there aren’t many sand beaches, but rather the picturesque beaches covered by rocks or just cliffs that fall into the blue water.  Everyone seems to know everyone, in a good way, and it’s incredibly safe.  Here, it was like COVID didn’t exist.  At the time we were there (June 2021), they had only had 17 cases.  On an island with only five ventilators, you can understand how they got to this point.  Complete lockdown and very strict restrications.  It was a breath of fresh air for us to ‘forget’ about COVID for a few days.

Bonaire is known as the Diver’s Paradise, inscriped everywhere, including every vehicles license plate.  Because it’s surrounded by coral reef and so close to the coast of Columbia, it isn’t bothered by the normal currents of other islands and the visibility, and integrity of the reefs, are impeccable.  However, because of all of this, virtually every dive is a shore dive.  A shore dive doesn’t involve a boat, but rather the diver carriers their gear, usually around 70 pounds, to the edge of the water and swims with it until it’s deep enough to dive.  This is most definitely not an option for me, so unfortunately, we did not dive in Bonaire.

The island was full of vacationers from the Netherlands; it is also a Dutch territory.  The people were incredible friendly and gave us just a small taste of culture that we all longed for.

Half of the island is covered in salt flats.  It was incredible to see this – from the mining to the manufacturing to the shipping.  Fresh salt, all right there.  It is also home to hundreds of pink flamingos.  We had a rental car here also and spent an entire afternoon driving around the salt flats and looking for flamingos.  We saw dozens, of course, and well we attempted some photos, it was more comical to attempt than to actually get any.

Because of where Bonaire is situated in the Carribean, it is not prone to hurricanes.  It is, however, very windy there all of time.  This bodes well for kite surfers, wind surfers, and blokarting.  Yes, blokarting.  Blokarting is essentially a go-kart that does not have a motor but has a giant sail, like a sail boat.  The wind captures hold of the sail and off you go.

So when Julie, my sister, suggested this, we all thought, “Sure, sounds like an adventure!”  We sat through about 30 minutes of instruction with the biggest takeaway being, “If you pull your rope tight, you will go faster.  If you loosen it, you will go slower.”  I am incredibly impatient and became frustrated with the overcompliation of these instructions.  Pull tight, fast.  Let go, slow.  It seemed so simple.

I crawled into my blokart ready to go.  The rope was on the dashboard and hung down between my legs.  I grabbed it and waited for the gentle push from the staff.  I was off.  The course itself was a giant oval and I started at the bottom.  I was on the left side, going clockwise, when I took the turn and went completely off road.  I vaguely remember something about letting go of the rope if things got out of control.  I felt this warranted me letting go, so I did and came to a stop after bouncing over some rocks and small plants.  One of the two staff members came running towards me and pulled me back onto the track.  He gave me a push and I was off again.

I figured this was normal, for new drivers to get a hand on the steering, so I went at it again.  This time, the second time around, I completely flipped the blokart upside down.  Because of the sail, I wasn’t completely on the ground but rather hanging upside down by my seatbelt.  I waited for the staff to come yet again to my rescue.  I asked, “This happens all the time, right?” The man responded, with raised eyebrows, “Well, sometimes…” He put me upright and pushed me off again.

I pulled the rope and this time I didn’t even make it halfway around.  I crashed into some spare tires on the side of the track before getting to the top of the oval.  This time I told the staff that I just wasn’t cut out for this.  He pulled me to the side, in my blokart, while I watched for 30 minutes as Tony and my two sisters went round and round, ever so graciously and waving each time they went by me sitting it out on the sideline.  I could not, for the life of me, figure out why they were doing so well with this.  It looked easy, relaxing, and quite fun.

After their 30 minutes were up and they were parked next to me, Tony looked seriously at me and said, “Let me guess, babe, you had your rope pulled tight the entire time.”  And I did.  I had no idea until he mentioned it.  It’s just how I live my life – rope pulled tight, fast and strong, ready for an adventure.

Well, we did!  And I would totally do it again!  We were all skeptical, of course.  And then they asked for $9 each in order to enter the park.  We reluctantly handed over our cash and started driving (we could have walked or ridden bikes, although I’m not sure this would have been safe knowing what I know now).  Once we turned the first corner, dozens and dozens of donkeys approached the small car we had and pushed their noses against the windows.  They were in front of us, beside us, behind us.  We could not escape and pushing the gas pedal felt like we were sure to squish one of them.  We cracked the windows and they put their noses in, big teeth showing like they were smiling for a camera and proud to be a donkey.

We laughed so hard that day, and it took us over an hour to visit the donkeys.  Julie and Natalie got out at one point, only to be kissed and loved upon by their new friends.  We guessed that there were roughly 500 donkeys in this sanctuary, each of them full of love and devoid of harming us.

If you are ever in Bonaire, please, please check out the donkey sanctuary.  You won’t be sorry.

Julie had really wanted to try wind surfing, and we were totally cool with watching her from Jibe City, one of the most trendy and fun hang out places along the beach in Bonaire.  She met her instructor while the three of us ordered pina coladas and some snacks.  We were very comfortable watching her and all the other wind surfers from our shaded spot by the restaurant.

It took about 25 minutes for Natalie, my other sister, and I to get anxious about trying out the water.  Natalie made the suggestion of renting a paddle board that we could just sit on and float around on in the water while Julie learned to wind surf.  We were successful in getting one of the workers to lend us one and help us into the water.

The water itself was incredibly clear and only about three or four feet deep.  We paddled towards Julie and she immediately yelled out, “Renee, I think you could do this on your knees.”  And just like, I became a wind surfer.  I know this seems trivial for most, but there are so many adventurous activities that I just can’t do, either physically or geographically.  It wasn’t easy, and I spent some time with Julie learning how to do it, making adjustments to my technique along the way, but in the end, I went wind surfing.

After a while, one of the instructors saw us and came out towards us.  We were for sure that he was going to scold us and tell me to get off, knowing I hadn’t paid for instruction and it might be dangerous.  But instead, he stood beside me and helped me with some tips and tricks.  He ran alongside me as I got going and even told me a about a place in Curacao (our next stop) that he was going to call ahead and let them know I was coming.  He told me a story about a man who was in an accident and lost the use of his legs.  He was an avid wind surfer, so you can imagine the devastaion.  But together, they crafted a seat on one of the boards and the man was able to compete in competitions.  I love stories like his.  A setback turned into something wonderful.

So for me, Bonaire brings memories of freedom and overcoming.  It’s the day I went wind surfing!