I read once that when you die you experience at one time all of the feelings, emotions, and experiences of all people that have walked the Earth.  It’s a profound thought and something that troubles me greatly the more and more I see.

I was not at all prepared for the intensity of the Killing Fields in Phnom Phen.  I knew it would be dark, but it hit me hard.

I didn’t know anything about the Killing Fields until a few months before our trip.  It disgusts me that I wasn’t taught about this tragedy, that it wasn’t a part of my education.  Two to three million innocent people were tortured and killed in a state-sponsored genocide from 1975 to 1979.  This is again another topic that I encourage everyone to read about, but I will give an overview from my perspective and share the stories I’ve heard and read about.

In 1975 the communist party was taking over Cambodia.  Pol Pot was the leader and he wanted to eliminate anyone with an education – teachers, lawyers, doctors, engineers, etc.  They would take families and separate them into camps where they would be put to work in the rice fields, given very little food, and interrogated for information.  Our guide is 46 years old today and his story is heartbreaking, like most of them.

His father was an engineer, although he had burned any documents indicating that he had an education so that he would not be tortured and immediately killed.  The Khmer Rouge (the communist party) looked for any signs of intelligence – someone with reading glasses or smooth hands or an accent, for example.  He was born in 1973, and in 1977, he was taken from his family and put into a child’s camp.  He was four years old when his mother had to hand her baby over to the officials, having no idea what they would do to him.

When asked if he was ever beaten, he factually told us two stories where he was beaten.  The first was when he tried to escape the camp to visit with his mother.  When he came back, they beat him several times on the back with an electrified stick.  He was not allowed to cry or wince, or additional beatings would happen.

On the second occasion, he was sneaking some extra grains of rice in the middle of the night.  They are starved at camp, and he was so outrageously hungry.  The guard heard a noise, likely the grains of rice shuffling in the container, and when she found him, he was given lashings.  He also was not allowed to sleep for the rest of the night and had to package up two big bundles of rice the next morning before he would be granted any food.

His grandmother was in a nearby camp and would secretly leave food under a tree between their two camps.  He figured this out very quickly and credits his survival to her doing this.  He was released in 1979, when the takeover ended, and because he knew where his grandmother’s camp was, he was able to find her and thus find his parents.  Had he not been near his grandmother, he might not have ever been able to find his parents.  He was young and didn’t even know his full name or remember what his parents looked like.  He is lucky that his family survived.  They talk about it often, as do many Cambodians.  It’s a huge part of their lives, most people still being impacted by it today, directly or indirectly.

He took us to one of the memorials and as we walked through, he pointed out areas where bones were sticking through the ground, or clothing that the victims wore coming up out of the soil.  The killing field we were at had 18,000 victims.  They would be brought to the killing field from the camps, blindfolded having no idea what was happening.  Often they were told that they were going home to see their families, not having any idea that they were about to be killed.  The Khmer Rouge did not have a lot of money for bullets, so they would instead beat the victims with bamboo sticks or axes to the back of their skulls until they died.  The victims didn’t even get the comfort of a quick death.  Once they become unconscious – still alive or not – they were pushed into a hole in the ground with hundreds of other bodies.  There was a loud speaker on a tree near the graves, used to block out the moaning of the dying people in the ground.  At the end of the killings, or when the grave was full, they would cover it with chemicals that would kill anyone still living, and then bury their bodies.

At this memorial, there was also a killing tree.  This particular killing tree was where children were beaten to death, no doubt while their mothers were restrained and forced to watch.  Our guide said that the tree was often covered in brain matter and chunks of hair.  The grave they were thrown into was discovered to be all women and children, all of them naked.

The memorial on this site contained the recovered skulls of thousands of victims.  Some of them were found without bodies, and many bodies did not have skulls.  The skulls were on display in the center of the monument, behind a glass wall, a heart breaking reality of what happened.

We also visited the S-21 prison, another horrific site.  Here, 20,000 victims’ lives were lost.  It is my understanding that those that were the most threatening to the Khmer Rouge were brought to the prison.  If you went to the prison, you did not leave.  It was a sentence to death.  Most lived for about one to three months before they were killed.  During that time, they would be interrogated and tortured.  Fingernails would be ripped out.  Electrical beatings were a common sentence.

The S-21 was a former high school, so there were many rooms.  Each room would house about eight to ten prisoners.  In the rooms, there was a rectangular, metal pale that was used for bodily waste.  It was an old ammunition box from the Vietnam War.  If a prisoner splattered onto the floor while using the ‘toilet,’ they were forced to lick it up.  There were many ways of torturing the prisoners but one that stands out is that the Khmer Rouge would hold a prisoner up in the air by their arms, using a pulley system, until they became unconscious.  As soon as they were unconscious, they were dipped upside down into a bucket of waste water – bodily waste, dead fish, poison – that startled them awake.  This would continue until they gave more information.

At the prison, there was a photograph of everyone that was killed.  The Khmer Rouge took each of their photos as they entered the prison.  Looking into the eyes of these individuals who knew that they were facing their death is emotionally demanding.  Young girls, young boys.  Mothers, fathers.  Innocent people knowing that they were about to be tortured and then killed.  I asked if many tried to commit suicide, and they did, but it was virtually impossible, and thus the torturing ensued.

I do not know how anyone could go on after living through the Khmer Rouge takeover.  Yet, our guide is one of the most inspirational people I’ve ever met.  The people in Cambodia are some of the kindest, most genuine people I’ve met in all of the places I’ve visited.  Phnom Phen is a beautiful city, full of vibrant life.  When we met our guide, one of the first things he said to us was, “Thank you for visiting my country.  You have given me a job.”  And the sincerity in his voice was something I’ve never heard before.

A few weeks before I left to visit Southeast Asia, I wondered, “How will this trip change me?”  They always do, in some way.  In different ways, this trip has made me angry.  Angry at the inequality in this world.  At the treatment of humans on this planet.  While the killing fields are not happening in Cambodia today, genocides are happening somewhere else in the world.  People are being treated unfairly – killed – for the color of their skin, their education, their family members, their religion…it goes on and on.

Those of you that travel might have heard of Anthony Bourdain.  He was a world-renowned traveler who committed suicide about a year ago.  I have to wonder if the pain of so many people’s stories around the world became too much for him.

I am one of the luckiest people on Earth.  With all of the pain, I also get to see the kindness and smiles of people, strangers really, and our paths cross for just a few moments.  And during those few moments, my life changes. 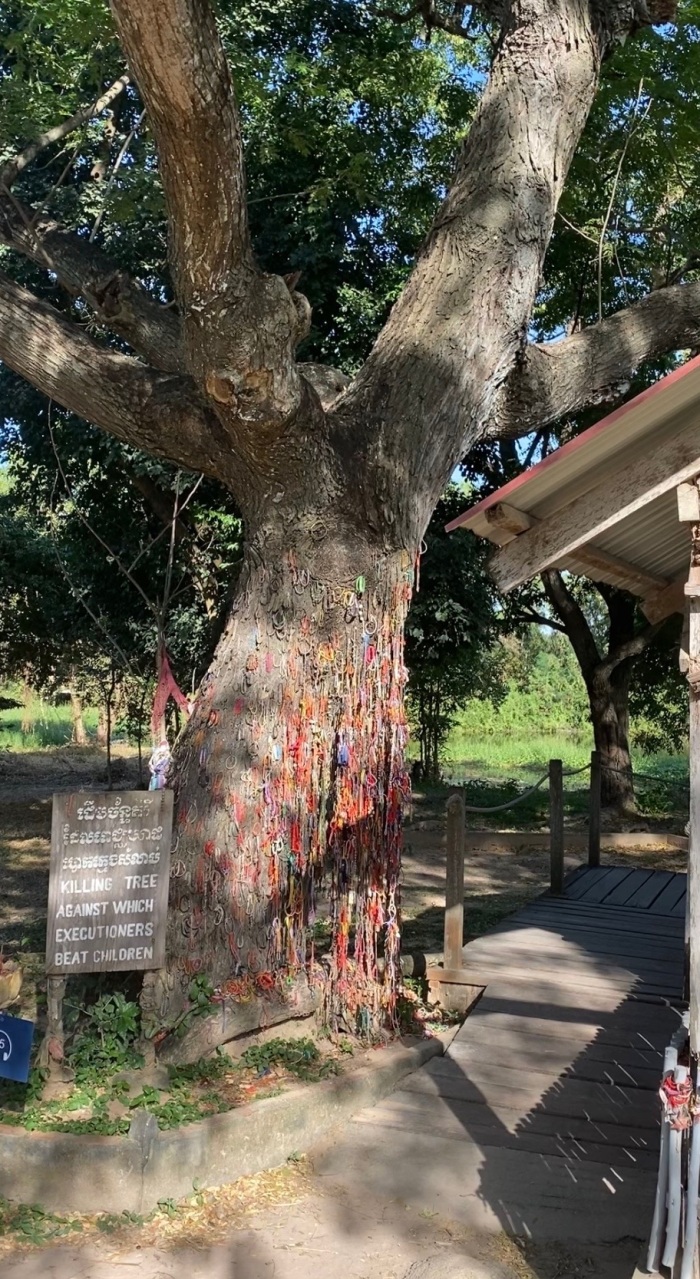