Ayutthaya is an ancient city, the capital of the Siam empire, built in the 1300s.  It is 52 km outside of Bangkok, and yes, there is a train that goes there.  We got to the train station early, hoping to get to the city before the heat set in.  We were not as lucky as I had envisioned.  The second class and first class trains were all full.  Third class does not have air conditioning, and given our experience the day before, we did not want to go through that again.  We bought tickets for a few hours later.

One of the things I wanted to see in Bangkok was the Sathorn Unique Tower.  This is a skyscraper that was built in the 1960s but never finished.  I figured we could hop on a subway since we were at the main train and metro center.  It turns out, that wasn’t as easy as I had envisioned either.  We made it, saw the building, and opted for a taxi back to the main station.  It was just as cheap as the subway and so much faster.  One of the biggest frustrations with Bangkok was the extreme difficulty in getting around.  There are trains, subways, boats, taxis, tuk tuks – all of which we took, none of which were easy.  It’s a city full of traffic that can’t easily be walked.

Our train to Ayutthaya was uneventful but cool – thank god!  We only had an hour and half here since we couldn’t get on the early train.  We got on one of the first tuk tuks and negotiated a rate for one hour.  He took us to three of the most well-known ruins and one temple.  It was astonishing, seeing ruins from 800 years ago, still standing.  There were headless buddhas, probably due to some political unrest through the years.  There was a buddha head overgrown by tree roots.  But what struck me the most was that the ruins were built with bricks.  I’ve seen a number of ancient ruins over the years, but none of them were made with brick.  It seemed like a modern technology for so many years ago.  None the less, I was impressed. 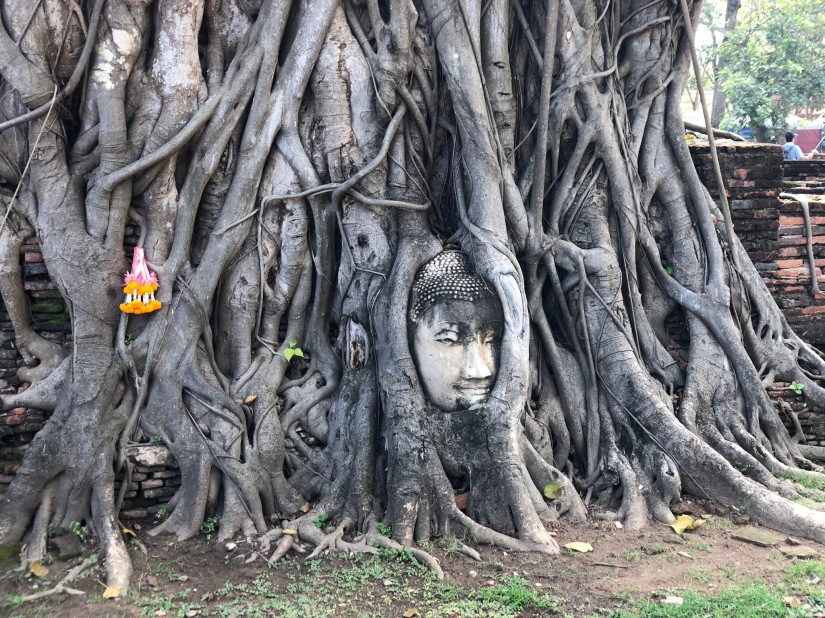 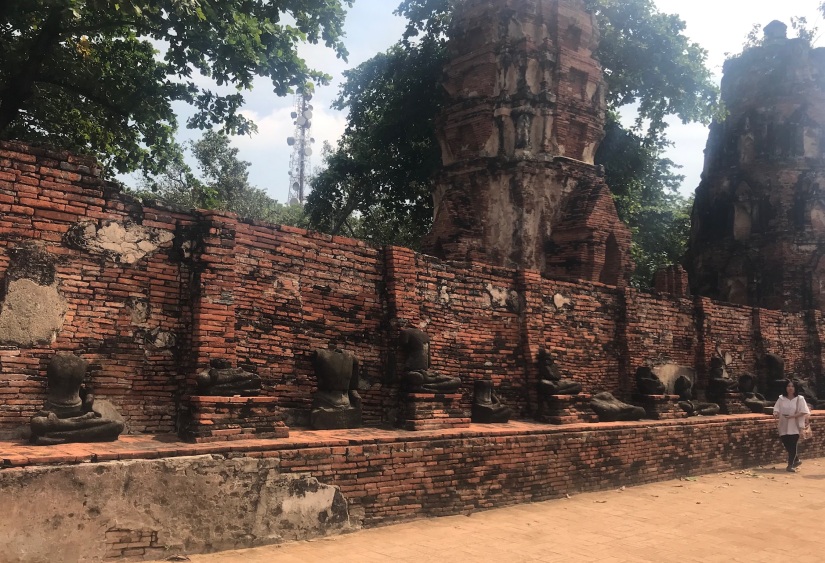 Our train back only had third class seats left, which meant no air conditioning.  It was an hour and a half ride, and cost 20 baht each (66 cents).  I told you Thailand was cheap!

We had stored our luggage with a storage unit at the train station since we were headed straight to the airport for a flight to Chiang Mai.  The luggage room had a sign that indicated they weren’t responsible for rats eating luggage.  That’s comforting!  I don’t think we have obtained any rodents – whew. 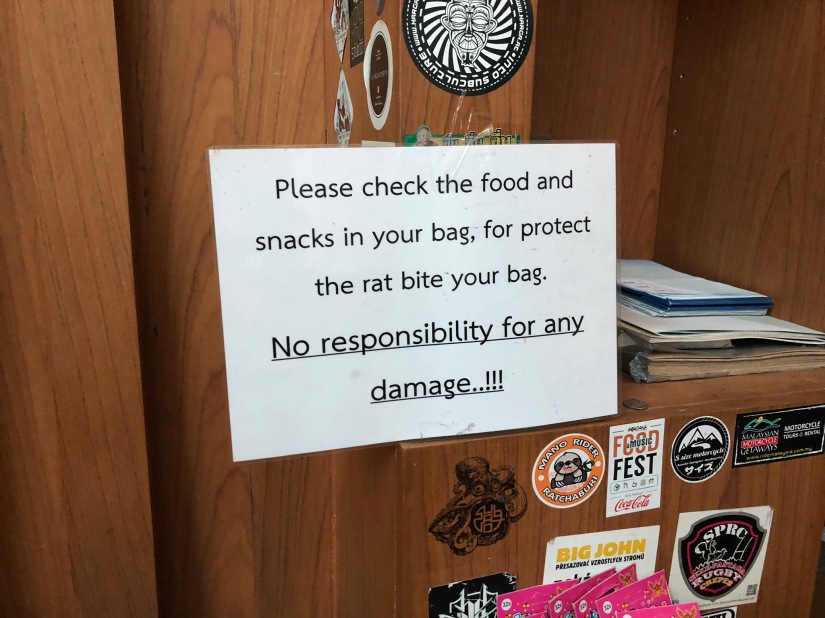 Our flight from Bangkok to Chiang Mai, in northern Thailand, was on VietJetAir.com.  The flight itself was short and uneventful.  The only thing that stood out were the extremely put together and beautiful flight attendants.  I think they were Vietnamese and were just stunning.  Their mannerisms should make American woman feel shameful, myself included.

Our hostel in Chiang Mai was brand new, but no elevator.  I climbed the four flights of stairs each day to get to our room that had two top bunks and one lower bunk.  The room itself was smaller than most Americans closets.  The restrooms were shared with the rest of the floor, both men and woman.  It is one of the nicest hostels I’ve ever stayed in.

We had dinner next door, which is where I had the best Pad Thai in all of Thailand.  It’s also where I saw one of the cockroaches, so not sure what that suggests, but none the less, when in Thailand!

That evening, we had reservations for the Chiang Mai night safari.  Thailand is my 52nd country, so I’ve seen quite a lot.  I’m not trying to be chauvinistic, it’s just factual. The night safari seemed more like a zoo to me.  I’ve been on two different African safaris and have always struggled with animals held in captivity since these experiences.  So, while I wouldn’t not recommend the night safari, just understand that it is not a safari like what most would consider a safari.  It is much more structured, and there is a guarantee that you will see animals, unlike an actual safari.