I carried sand around with me for weeks after that trip. I just couldn’t get rid of it. You see, it was stuck. Stuck in my wheel. The handrims on the sides of my wheelchair, that I use to propel myself, are hollow (to make the wheelchair lighter). There is a small hole, just a little larger than the tip of pen, on the inside of the rim. And, well, sand is smaller than the hole, and thus, in went the sand.

I didn’t actually use my wheelchair on the beach that much. Wheelchairs and sand don’t mix. The wheelchair just sinks in and it becomes impossible to move. But apparently the very few times that I did actually bring it through sand, I was able to collect about a half cup worth. It would make a howling sound every time I moved. Finally, one evening, I sat on the couch and took each wheel off of the frame. For about 30 minutes, I spun them in my lap, trying to get tiny pieces of sand to line up just right with the hole on the rim. Eventually, though, my living room floor looked like a beach for Barbie dolls. And my spinning across the floor was finally quiet.

Looking at the sand brought back memories of the day on the beach. It had been years since I had just spent ‘a day on the beach.’ I forgot how relaxing it is. It was a perfect day in Punta Cana, about 80 degrees with just a slight wind. The sand was some of the whitest I’d ever seen, and the beach itself was shallow. This was great since Matt had piggybacked me to our spot just along the water. We lathered ourselves in sunscreen and I promised myself I would wait 30 minutes to let it absorb into my skin. But seven minutes later I had crawled the ten feet to the edge of the water. I LOVE the ocean water. Just absolutely love it. I’m not sure what it is exactly, but I think it’s one of the only places that I can go and be free of my wheelchair. I can stand! I can walk! I can float! I can just be.

I’m probably a little too brave when it comes to the ocean. I find myself wanting to go further and further into it, fighting and jumping the waves. The water is so clear that I can’t imagine anything ever happening to me. I know better, of course, but the adrenaline rush always gets the best of me. That day, I spent several hours just flailing my arms, crawling on my knees, splashing around. I saw a baby turtle (I was quite proud of myself!) who was missing a leg. I wondered if it would survive, or if in the animal kingdom, a malfunctioning leg is the end of the life cycle. I wanted so badly to pick it up in the palm of my hand (it would have fit just perfectly) and carry it further into the water. But in life, we each have our challenges and sometimes the fight to the end is more important than just getting to the end. So I let it be, knowing that it had to make this journey on its own. 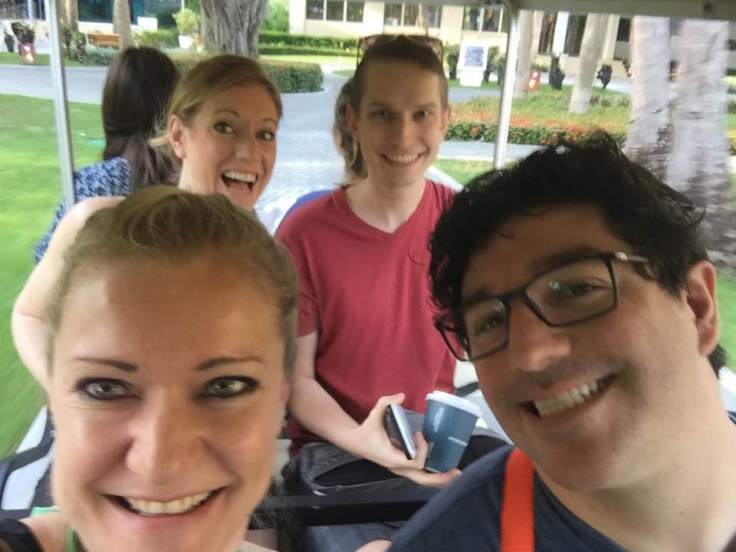 When I got back to the hotel that night, I noticed that my knees were red with several large scratches. I knew it was from crawling on the sand. It hurt when I did it. But they weren’t battle scars, they were victory scars. The day was simply amazing!

That night, we celebrated New Year’s Eve. We hadn’t originally planned on being awake at midnight since we would be scuba diving the next day. But the diving schedule was rearranged and we found ourselves with nowhere to go and no open reservations at any of the nearby restaurants. Fortunately, the hotel bar was open and we were able to grab a few sangrias. Our age has caught up with us though, because at 12:20, we were all in bed, lights off and sound asleep.

The next day we ventured out for scuba diving! Julie and Matt had joined Tony and me on this trip and were going to be doing their first dive into the ocean. Earlier in the trip, they went through the instructional part of the training while Tony and I did some diving in the ocean…

We had signed up for two dives. I, like I always do before jumping in the water, became extremely anxious and grumpy. I always get nervous and afraid of going 40 to 60 feet underwater. I think of all the horrible things that could happen and it begins to consume me alive. Our dive masters must pick up on this because they usually send another dive master with just Tony and me. Or…maybe it’s the wheelchair that scares them. Yep, it’s probably the wheelchair. Either way, I always feel much better having an extra ‘experienced’ diver with us.

There were about 25 divers on the boat for these dives. Most of them were new or very inexperienced, with Tony and I probably being on the more experienced side of the scale, having each done eight dives before. Our divemaster asked if we got seasick and we told her no. She proceeded to tell us that we would let everyone else jump in first and that we would go last, since we should be fine on the boat, which was swaying pretty heavily back and forth. We waited patiently, all the while my anxiety and fears just bursting at the seams. Finally, we were able to jump in. I sat on the edge and held my mask to my face. The captain was behind me and pushed me forward. Splat! And all I could see was coral deep down below me. “Ok. I’m fine,” I told myself. And I really was!

The dive itself was amazing. One of the coolest we’ve ever done. There were tunnels or coral, and sand waves filling the ocean floor. We floated along slowly, taking it all in. The time went fast, but I knew we had another dive, and was excited for that as well. I came to the surface ready to jump again. As soon as I crawled onto the boat from the ladder that was bouncing forcefully back and forth, beating against the side of the boat, I looked around and saw several divers puking their guts out. There were piles of vomit all of the boat, and passengers leaning over the edge, hurled up in agony. It took me a minute to realize that they were all sick from the motion. More and more divers came to surface, and as they took their seats and waited for the rest of the group, each one started getting sick.

I looked across the boat to Tony and asked how he was feeling. He shook his head and gave the thumbs up signal. I kept to myself, not wanting to get sick looking at the pure disgustingness. The dive masters and captain were filling buckets of water as quickly as they could and dumping them on the divers, to keep them cool and to calm their motion sickness. In between this, they were attempting to clean the vomit from the floors.

They rushed as much as they could, and as soon as everyone was on board, we started moving, the wind calming most everyone. I saw Tony get up and head to the stern of the boat. He leaned over the edge and I knew that he was not feeling well either. I grabbed at the neck of my wetsuit, wanting to get cool air against my skin, and hoping I could keep my breakfast down.

I wanted so badly to make that second dive, but I was lightheaded and kept hearing my instructors from my training months earlier stressing how important it was not to dive if you weren’t feeling well. I looked at Tony and asked if he would be upset if we bowed out on this one. He was perfectly okay with it, especially since we had more dives in a few days with Julie and Matt.

So the day had arrived when we would get to experience diving with Julie and Matt. It was so much fun to watch them do their first dive. They were nervous, of course, but studies show that going outside of your comfort zone with another person creates a bond that lasts a lifetime. And that’s what this did for us. We did two dives as a group, each one equally as fun. And when we were done, Julie and Matt had their certification.

We were rewarded with beers and rum! Our dive masters were so much fun, flirting with Julie and helping us through the sand on the secluded island where we had lunch. We made a stop at the Natural Swimming Pools off the coast of Saona Island where we spent time snorkeling and searching for live startfsh. One of our dive masters found one for us that size of my head. We each held it in our hands for a few minutes, expecting it to be soft and fleshy. It was the exact opposite. It felt firmer than wood and didn’t move at all. I wondered if it was still alive…and may never know.

When we got back to land as the sun was setting, we boarded our bus for an hour long bus drive back to the hotel. Our group was full of energy, hearing stories from our dive masters and learning about their lives. They were from all of the world – Brazil, Japan, Spain…everywhere. I thought about how awesome of an experience they were having, meeting people from all of the world, building their life stories with cultures I couldn’t even begin to understand. I’m envious of them in so many ways. It must be hard to pick up and get on a plane, at the young of 20 (most were in their early 20s) and fly to a land where you may or may not speak the language. To leave your families behind. To trust the complete strangers that will become your new families. But human beings are like that, we bond somehow. And just like Julie, Matt, Tony, and I created a bond from our adventure that day, each of the dive masters created their own bonds with people from around the world, people that would be their friends for life. 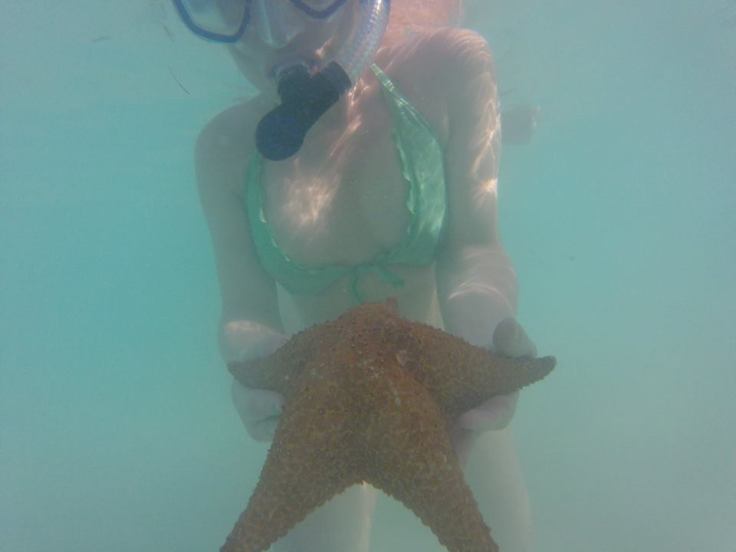