We again woke up at 4 am.  This would be an ongoing trend for the rest of the trip (and unfortunately, would carry through for a few weeks back in The States).  Matt was due to arrive around 10 am, so we headed out to find a new café before meeting up with him.  With much success, we were able to find a café that was even better than the one the day before, which was a big feat to begin with.  I successfully ordered a coffee and a yogurt, or so I thought I did.  After paying, I grabbed my yogurt and waited patiently for my coffee.  It never came out.  Frustrated, I went back to the counter.  The language barrier was even more frustrating.  I pointed, she pointed, we both pointed at signs and money.  I couldn’t take it anymore.  I threw my hands up and walked back to our table.  Amelia patiently went back to the counter, and using her Google Translate app, discovered that I had only paid for a yogurt and managed to get me a coffee.

I’ve been to dozens of countries and dealt with as many language barriers.  It’s amazing how hand gestures and a handful of words can form an understandable conversation.  But the language barrier in China was the worst I’ve ever experienced.  That’s not a bad thing, it’s just a fact.  Their language uses logograms, or symbols, instead of letters.  Logograms represent a thought instead of a word.  An average Chinese person knows 8,000 logograms.  So, as you can imagine, it’s a very different type of language, and thus a very different type of language barrier.

Ordering food at restaurants consisted of pointing to an item, holding up our fingers to indicate how many we wanted, and nodding or shaking our heads when the server confirmed our order back using hand symbols.  The entire process was completely mute, something that would have been quite humorous from the outside.  Young college students who were learning English often fought over who would get to serve us.  They used this time as an opportunity to hear our accents and to also work on theirs.  This gave me an appreciation for the differences in our languages and their hard work and determination to learn English.  The two languages are just so different; I can’t imagine undergoing the training.

After breakfast, we met up with Matt and navigated our way to the Lama Temple.  The Lama Temple is the most well-known temple in Beijing.  It’s hundreds of years old and is very beautiful, much like the temples you might see on a Chinese post card.  My favorite part of the temple was the Big Buddha.  It has the world’s largest Buddha made from a single tree and stands something like 60 feet in the air.  Yes, a very random fact, but interesting. 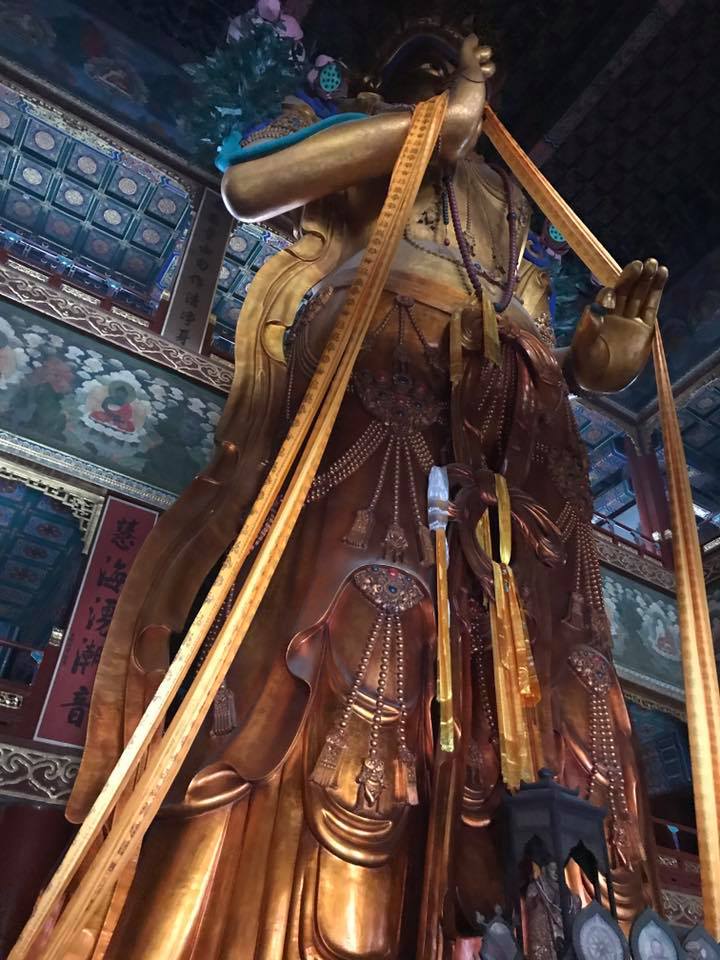 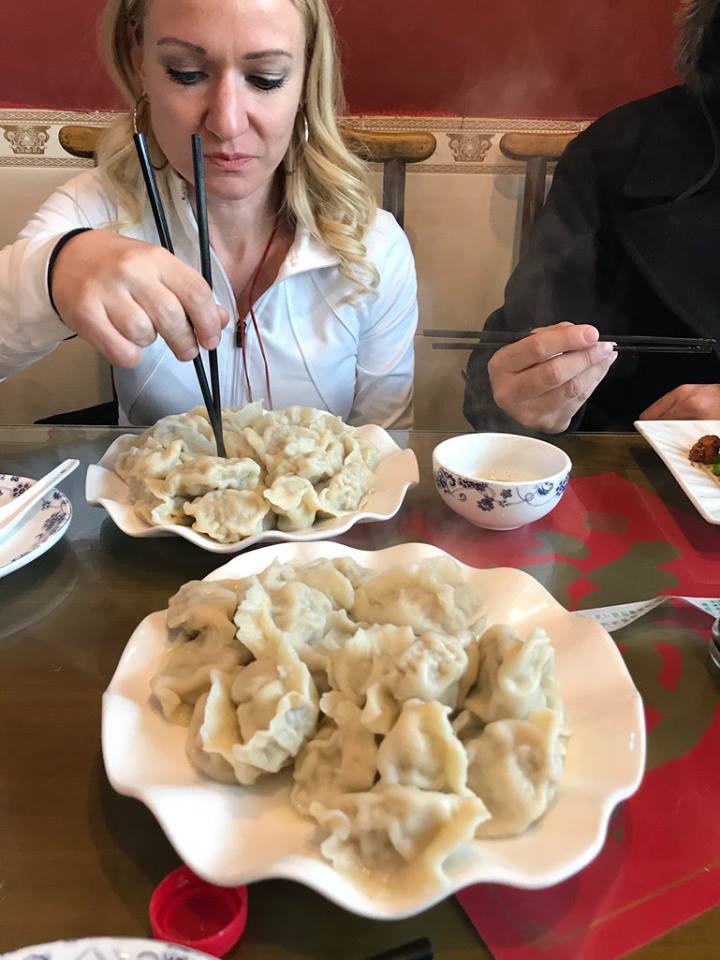 Our next stop was the Confucius Temple.  It was supposedly right next door.  We walked and walked and walked but could not find it anywhere.  We found the red wall surrounding it, but there was no entrance to get in.  Through this process, we found ourselves lost in a hutong.  A hutong is a neighborhood with small, winding streets and alleys.  Most of them are full of courtyard type residences, although some are predominately retail and dining.  The one that we managed to get lost in appeared to be hundreds of years old.  There were bikes in the streets, women’s underwear hanging out to dry, and local people going about their day.  While it wasn’t a new or well-kept area, it was very clearly people’s homes, and opened our eyes to a part of a Beijing that we had not yet seen.  At one point, we were struggling to get out of the hutong and a woman stopped us in our tracks.  She held her hands up and made a T figure.  We didn’t understand what this meant and shrugged our shoulders as we tried to walk past her.  She quickly gave us a hand gesture and was shooing us away.  We learned later from another local that the T symbol meant stop.

Outside of the hutong, we searched again for the Confucius Temple.  With no luck, we opted to get lunch instead.  We found a local place serving dumplings.  I was excited to try these, plus they were serving tanghulu outside on the street.  Tanghulu consists of fruits covered in hard candy on bamboo skewers.  Outside of the bakeries, this was my favorite food in Beijing.  We had a few skewers before our dumplings.  The pork dumplings were tasty as well, and a good opportunity to brush up on my chopstick skills.

We gave up on trying to find the Confucius Temple and headed towards Olympic Park.  The 2008 Olympic Games were in Beijing, and the park was beautiful.  Outside of the city, it exposed us to something we knew was there but couldn’t really see.  Pollution.  We had come to Beijing with pollution masks in hand.  And we wore them most of the time we were outdoors.  Much of what I smelled seemed to be car exhaust and cigarette smoke.  I couldn’t see far in the distance while we were in the city surrounded by buildings.  Just a few miles outside of Beijing though, the skyline looked hazy.  It looked like a storm had just gone through, or that morning fog was lifting.  But it was 2 pm, and it was evident that it was not fog. 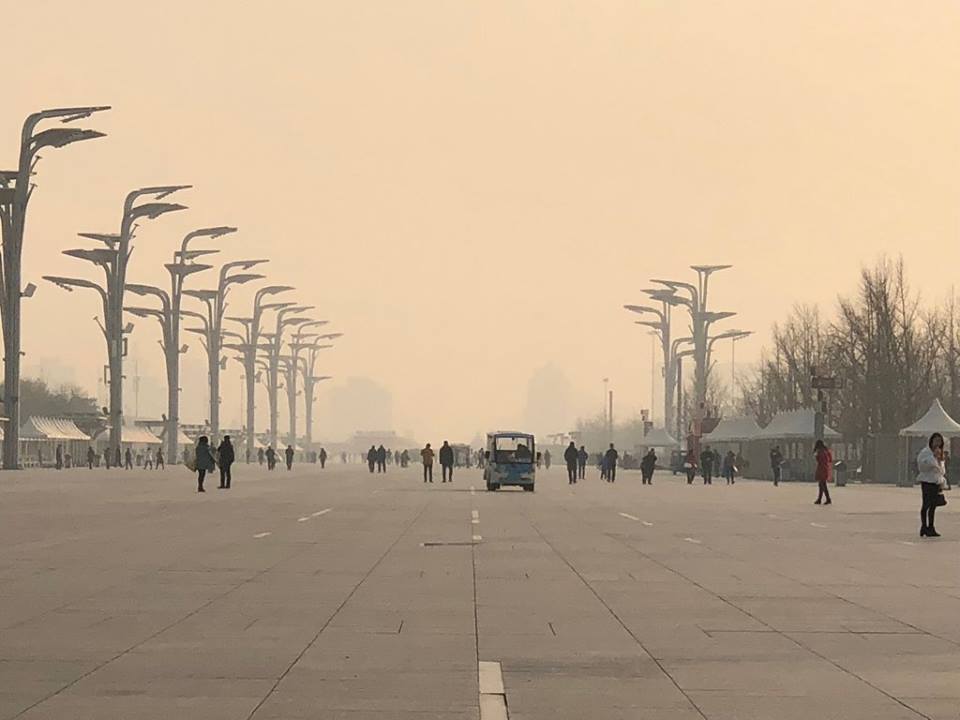 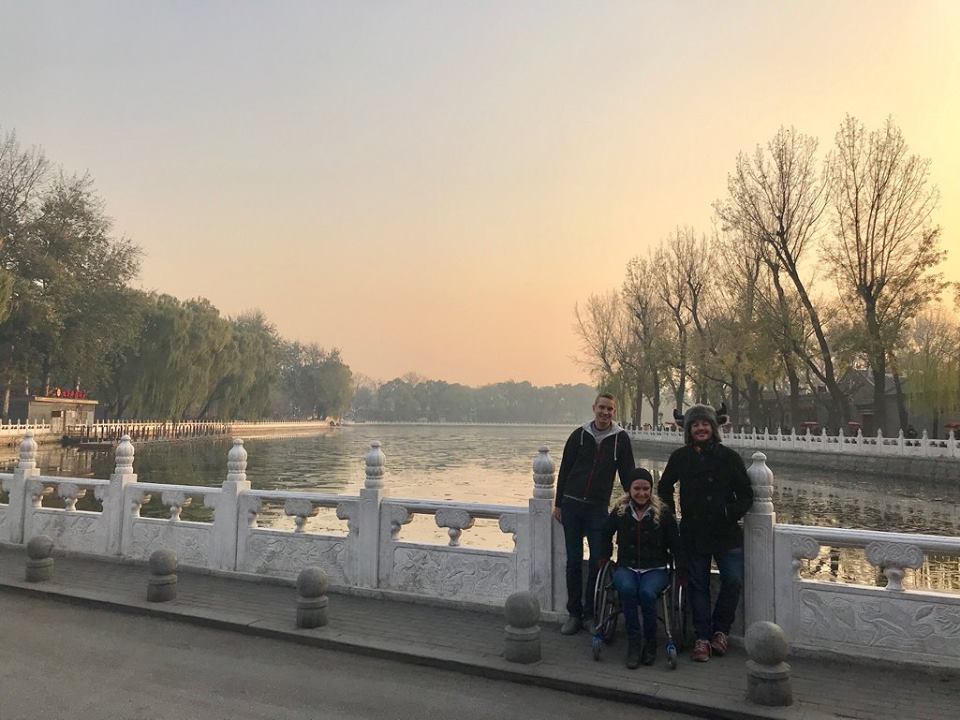 What I experienced with pollution in Beijing has changed me.  I knew we had a global problem with pollution, but I hadn’t really experienced it firsthand until Beijing.  Amelia and I both got sick in the first three days; we can only assume from the pollution.  Over half of the people wore masks on a regular basis.  Our clothes smelled of pollution when we arrived back stateside.  But what hit me the most was the impact this would have on children.  We were walking through a market at one point and I noticed a ‘pollution mask for infants.’  I thought to myself, “These children will be born wearing pollution masks and will likely never know any different.  They will think this is normal, and it will become part of their wardrobe, like a pair of pants.”

I’ve since started to think twice about turning on the heat or air conditioner.  I’ve stopped using plastic grocery sacks.  I have a drying rack on my Christmas list.  So while this was a not-so-great thing to experience, I’m glad I did. I was able to experience something firsthand that is a bigger problem than I ever knew.  It changed me in a good way.

That afternoon, we walked through the Houhai area of Beijing.  This was my favorite area of the city.  There were restaurants and shops sitting along the edge of a lake, situated in the middle of the city.  It was a small area, but very quaint and welcoming.  We walked through it fairly quickly, not knowing when we had exited and that there weren’t restaurants for miles from the area.  We had been wanting to grab a drink and were looking for the perfect place.  About an hour and half later, and three miles of walking as the sun set, we found a restaurant with menus only in Chinese.  But…there was a poster on the door with a beer bottle.  We would point to it, nod our heads to the waitress, and have a beer before walking to the ‘night market.’

A few miles more and we arrived on the block where the ‘night market’ should be.  The night market was where we would get to see the various types of local foods, most importantly ‘bugs on a stick.’  We had trouble finding the actual market.  At one point, we went into a shoe store and Amelia held up her phone with Google Translate.  The woman quickly responded in broken English, “No!  No, not me!”  We’re not sure what Amelia might have asked her, but we can only assume it was something along the lines of asking about an undercover prostitution organization.  The woman was absolutely horrified.

Eventually we found the night market, which was about two square blocks, lined with food vendors.  Many of them were serving cockroaches and scorpions on a stick.  Scorpions are a delicacy in China, and some of them were served still alive.  We also saw what appeared to be baby ducks on a stick.  Their entire bodies were there, covered in a red sauce and fried.  It was something to experience, and I wish I was brave enough to try the food, but it was just simply beyond my adventure needs… 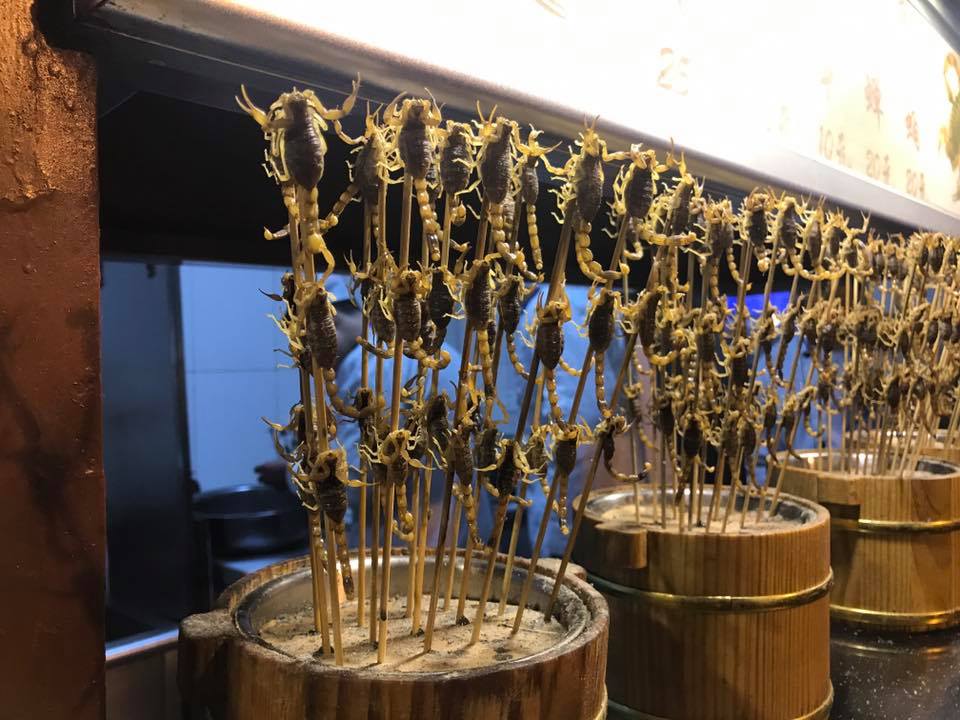 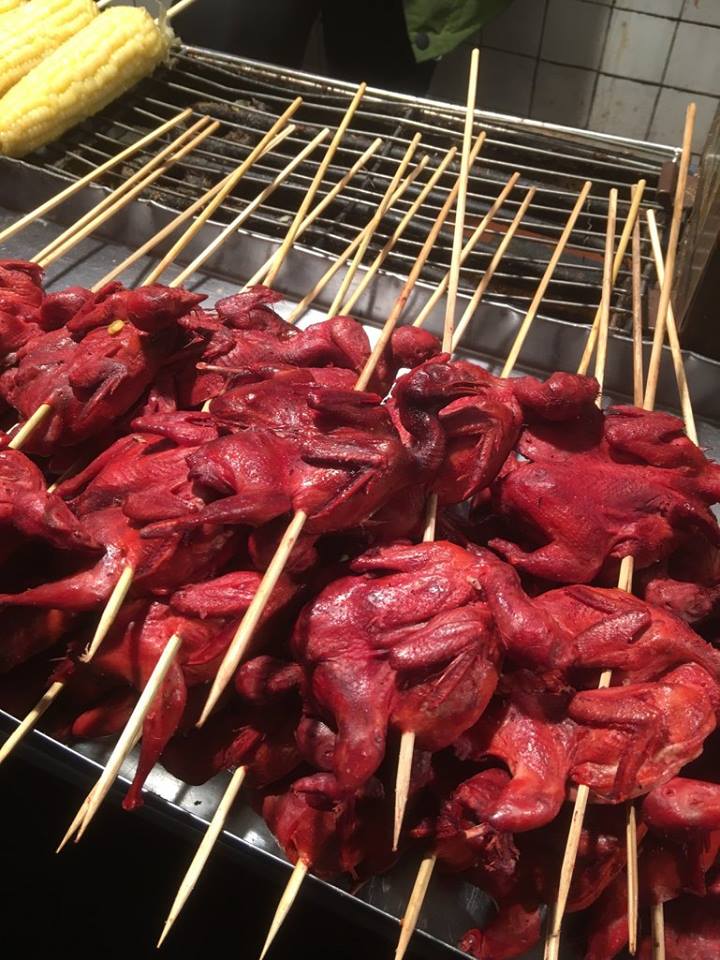