Our wake up call was set for 4:30 am, which meant that someone would pound on our door until we responded.  But we were wide awake by the time they even arrived.  Today was the day that we got to go into Kruger Park to see the animals!  All of us were beside ourselves.  We were told to dress warmly as it was often quite chilly in the mornings.  So we bundled up in our sweaters and long pants and piled into the safari van.  It was an open vehicle with three rows of three seats, so a total of nine people plus the driver.  We all made ourselves comfy and Tony worked with his camera equipment, preparing to capture as many photos as possible.  He might have gone a little overboard, as one of the lenses was the size of a kitchen sink.  But he had fun none the less.

We all had an animal we wanted to see the most- some a rhino, some an elephant, some a giraffe.  But I think we were all hoping for the big five – elephant, lion, water buffalo, giraffe, and rhino.

Our first sighting was a lion!  I couldn’t believe it!  We had found a lion within a matter of minutes.  The lion was ‘marking his territory’ (the same way dogs do) and running in a large circle.  There were hyenas all around as well.  I learned that lions and hyenas are competitors and hyenas are notorious for ‘stealing’ a lions kill.  Lions, to prevent this from happening, will kill the young hyenas.  The cycle of life…

We spent a considerable amount of time waiting and hoping we’d get to see the lion kill. We didn’t, but our guide told us that what we did see was very rare, so we felt fortunate to have been this lucky so early on.

After 30-60 minutes of stalking the lion, we drove a distance further into the park where we found our first elephant.  Elephants have always fascinated me.  And it amazes me how close we can get to them without them even looking our direction.  Kruger Park was filled with elephants, so they would become a frequent site for us.  But each time, it was still fascinating and stopped to capture photos.

Our next animal was the rhino!  I was most excited about this one.  We saw him walking towards the path, slowly but surely.  He must have weighed at least two or three tons.  And he looked tired and worn out.  He stopped on the path in front of us to smell, and maybe eat?, some dung from another animal.  It was gross and fascinating all at the same time.

We were three or four hours into our safari and we had seen three of the big five!  This was great!  We’d also encountered lots of gazelle, impalas, wart hogs, and a few zebras.  When we found the water buffalo, we found the water buffalo.  There were dozens of them standing on the path in front of us.  They all looked mean.  And angry.  And ready to ram into us at any given moment.  We learned that water buffalo stand in circles, with the young in the center for protection, and that they are one of the most dangerous animals in Kruger Park.  This made me nervous on the few occasions when our vehicle was surrounded by them.

We had a quick lunch (which we brought with us that morning, pre-packed in a brown paper sack) and headed back into the park.  There was one more animal that we wanted to see – the giraffe.  I was getting nervous that we might not see one, but lo and behold, we found a small herd in the distance.  We had completed the big five!  I was feeling lucky and asked our guide if he could also help us find a cheetah and a leopard.  He said he would try but that it was very hard.  Unfortunately, he was right and we did not get to see a cheetah or leopard in South Africa 😦

Our day was coming to end, after eight hours of driving around Kruger Park.  We had another safari later in the week, and I know we were all so excited to see more animals.  I’ll post a few photos, but know that not a single one of these photos can even come close to the experience of being in the wilderness surrounded by the animals…their smells, the smell of the trees, the feeling of the wind, the sounds.  All of it is something that must be experienced together to make it what it is.  The energy I experience with something like this is something that cannot be replicated anywhere else.  It really is one of those things we are lucky to experience a handful of times in our lives, if at all. 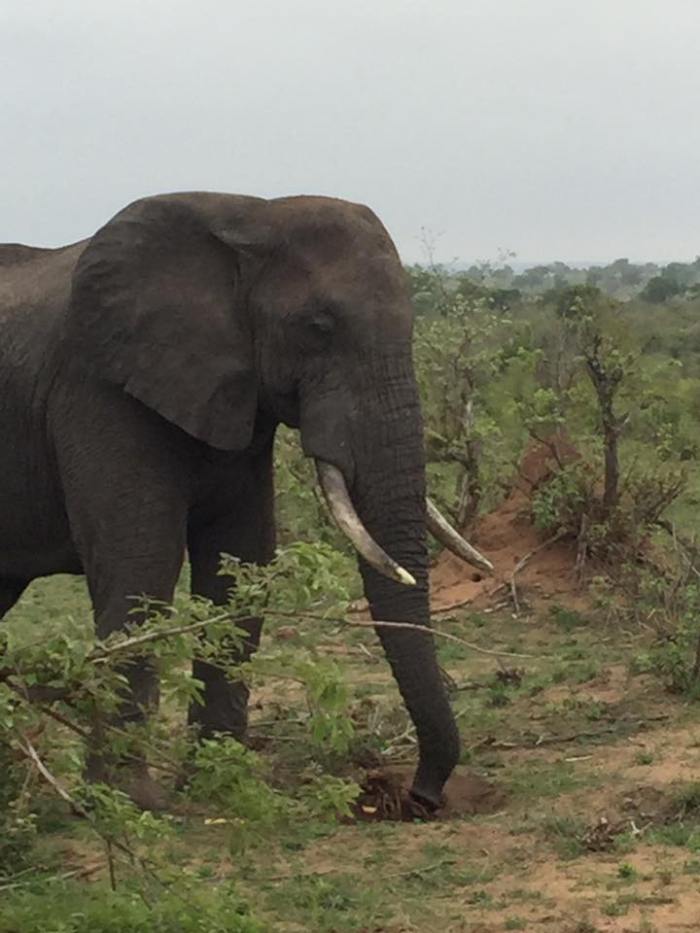