I don’t want to say that yesterday was uneventful, because after all, we are in Prague. But in the whole scheme of our trip, it was an uneventful day for us. We woke up with plans to see only a few more things in Prague and mostly just enjoy the city…the food, the people, and the architecture.

We left the hotel and headed towards the Dancing House, a very uniquely shaped office building, and what appeared to be relatively new. Across the street, we found an adorable little underground pub. It was closed when we arrived, but the staff inside was kind enough to let us in early. Tony bounced my wheelchair and me down the six or seven stairs and we found ourselves in a booth in the back corner. It was quiet being the only guests, and the staff was so nice to us. Tony had a meat entrée large enough for both us with a side of bread and potato dumplings. He topped it off with cheese apple dumplings. Needless to say, he’s been enjoying the food, which he says is some of his favorite. I, on the other hand, have been trying to sample everything but know that if I eat too much, he won’t be able to help me up the stairs. So salads it has been for many of meals. 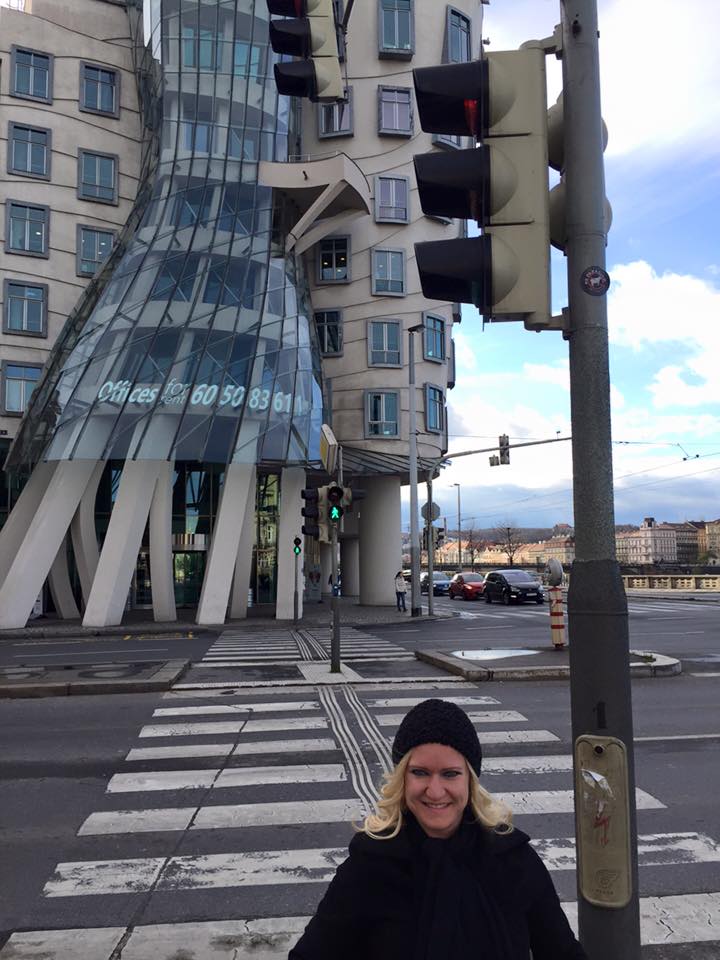 After lunch, we just strolled, slowly but taking in everything. We stopped by the Museum of Communism, where we saw a very large part of the Berlin wall. Of course this was up two flights of stairs, which you can probably tell by now that we’re becoming masters at. I hopped out of my chair and scurried up with Tony following behind, wheelchair in hand. One of the advantages to this is that I didn’t have to pay for my ticket (this is the case at many tourists sites that aren’t 100% accessible).

We ended our afternoon with beers at a café along Wenceslas Square. There was one more beer I wanted to try before we left. Budweiser. From the original town Budvar. And on our way back to the hotel, we stopped for some Old Prague Sausage, which Tony dropped the first time, but said it was worth going back for a replacement (so we did). 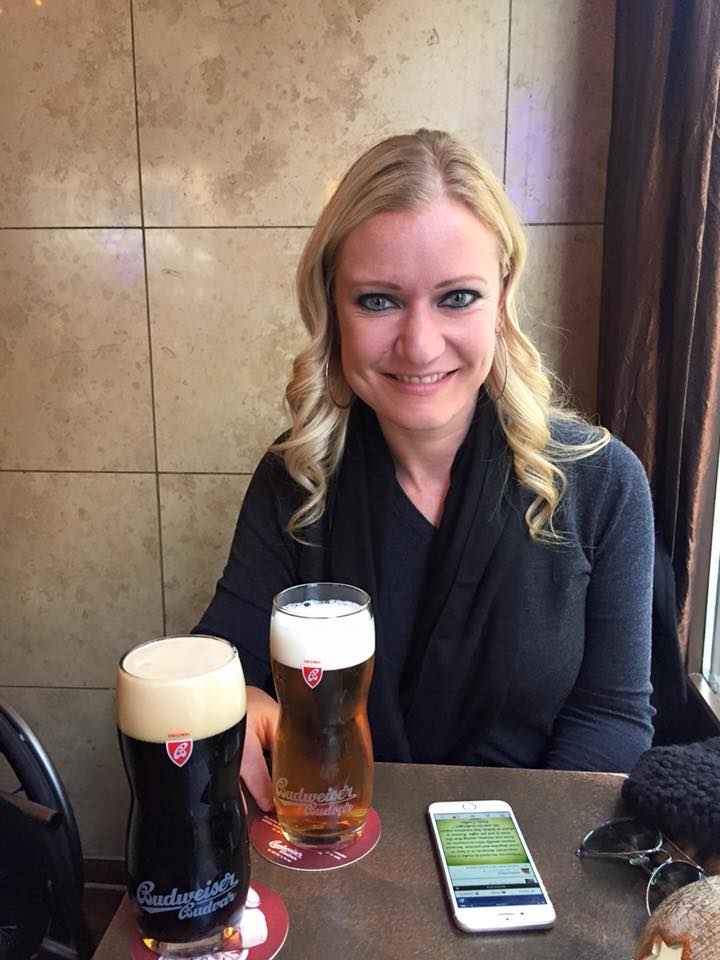 It is days like this that I love just as much as the touristy packed days. Days that we get to just sit and watch the locals. Days that we can really engulf ourselves in the culture. The Czech Republic is a beautiful place, full of charm and romanticism. It comes highly recommended on my list.

Today we were up bright and early for our four-hour train to Vienna. We arrived at the train station in plenty of time, had our tickets validated, and a quick morning tea before we left. While I’ve visited Innsbruck, Austria, I have never been to Vienna. Thus far, I am in love. I love it even more than Prague. The city appears to be newer and a little better kept. The sidewalks are virtually all new and flat (unlike Prague’s cobblestone streets and sidewalks). After we left the train station, I couldn’t help but propel myself quickly along the sidewalk. I felt so free. No worries of a big bump in my path, or Poor Tony had to jog to keep up with me. It’s the little things in life that we take for granted. Today, I realized nice sidewalks are one of those things. I cannot wait to see what else the ‘city of music’ has waiting for me! 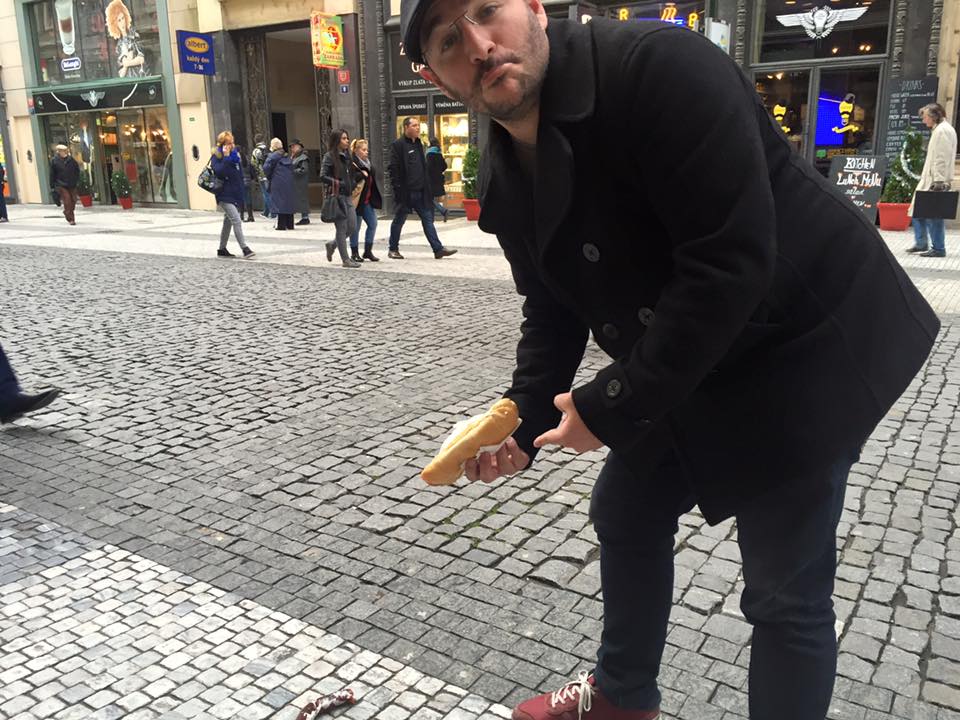 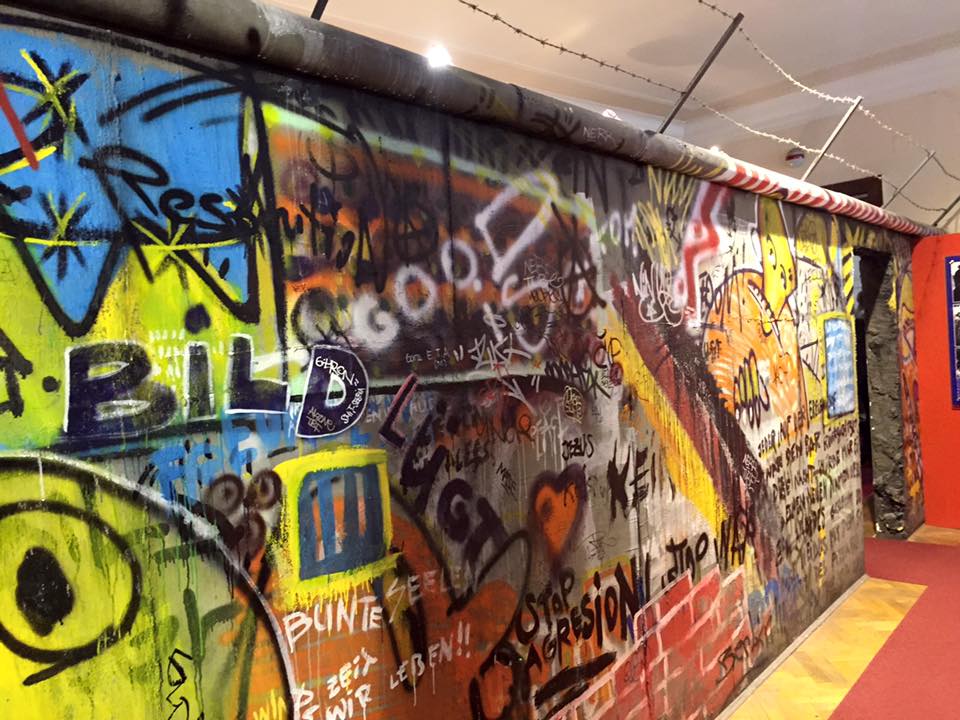