Today was a BUSY day! We were up at 7 am, had breakfast at the hotel, and met up with our tour guide and group. There are 11 tourists in our group, and thus, we’ve been traveling around in a very large van. We probably got in and out of the van 15 times today, which consisted of crawling across the floor and down (or up) three rather large steps. All worth it though!

We made several stops in Casablanca. Our first was the Central Market, which was full of produce and fish. The fish market was indoors, and full of smells! The young Arabic men were having a blast with us, trying to get us to touch the fish and embrace the smells. It was potent, but fun to play along with them and get their reactions.

Next, we stopped at the Hassan II Mosque, which was one of the biggest mosques in Morocco, and relatively new (built in 1993). It was along the water, and the wind was cold. So we grabbed a few pictures and walked a little inland. Amelia wanted some hairspray and Tony was looking for Red Bull. It was impossible to find either. We went to probably ten tiny, little local stores. No one spoke English and we weren’t able to find either the hairspray or Red Bull. We still do not have hairspray or Red Bull.

We also visited the Royal Palace in Casablanca. Casablanca is the economic capital of Morocco, while Rabat is the capital city. The king has several palaces in each of the major cities in Morocco, and we were able to visit both the Casablanca and the Rabat palaces (and we might be visiting more palaces in the next few cities). They were both equally gorgeous (although we weren’t able to go inside), and seemed to have very similar security, with military and police guards surrounding the entrances and gates.

My favorite part of the day was our visit to one of the public parks. While it was beautiful in and of itself, the experience we had was outstanding. We exited the van and immediately found ourselves on a large area of concrete, covered – literally covered – in pigeons. There was a very friendly (and funny!) Moroccan man throwing birdseed in the air to attract the birds. He would also take handfuls of it and hold his hand in the air, inviting the birds to perch right there on this arm and hand.

He insisted that we each try it. Julie went first, and I was confident that I just couldn’t do it. The thought of a pigeon, a pigeon, perching on my arm and pecking at my hand was just repulsive. But, an experience is an experience, and I shut my eyes tight, grabbed the birdseed, and held my hand in the air. Just seconds later I felt the claws of the bird grab a hold of the skin on my hand and little beak pecking at my hand. I couldn’t open my eyes, but I knew he was there, just pecking away. And like all things I’m afraid of doing, once done, I’m really glad I did. 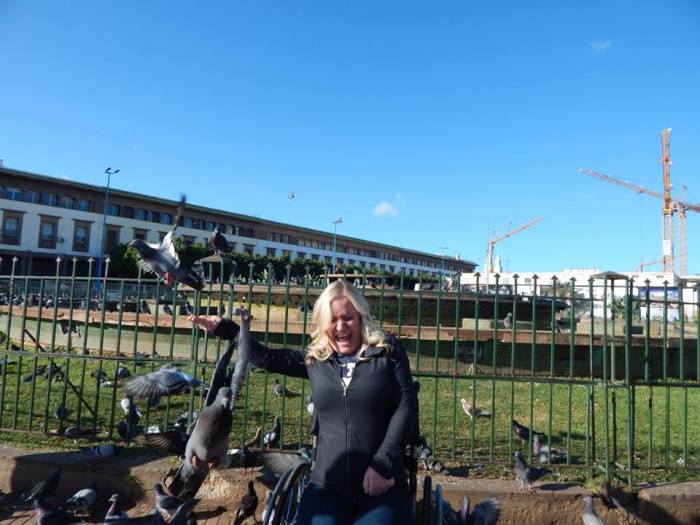 We spent the next hour and half driving to Rabat, where we completed our day with the Royal Palace tour and dinner at our hotel. Thus far, Morocco was amazing. We had learned a few words in Arabic – shukraan (thank you), marhabaan (hello), la (no), and nem (yes). The language is very different than any Latin based language, and thus, it’s difficult to communicate. However, the people are very accommodating and patient in dealing with our ignorance.

Another observation I had was that there are very few blondes. Outside of my family and me, I’ve seen only three other blondes in the past few days. We’ve gotten a ton of compliments on how beautiful our eyes are, and someone asked if we were on TV. I explained to one woman that I thought Morocco was beautiful, and she responded that it was only beautiful because I was seeing it through beautiful eyes. The irony of the conversation is that I would love to have her olive skin and dark hair. I guess we, as humans, will always want what we can’t have. Regardless, the people and the country are breathtaking.

And my final reflection on Morocco (thus far) has to do with accessibility. It simply is not an accessible place. The sidewalks are old, and many are full of tiny rocks buried in dirt, or have very large craters in the middle of the path. There are makeshift ramps for flights of stairs that appear to be made of leftover concrete. But, this is all made doable because of the extremely (almost overly) helpful people in this country. I’ve been pushed through restaurants, helped up stairs, told about shortcuts to avoid rough terrain, and one man even offered to carry me on his back. It’s been an adjustment for me, as I am usually very independent and do not like people helping me to that extreme. I know it is a cultural difference (and in this case a better cultural difference), and I am trying my hardest to let the goodness in people work to my advantage. After all, we need more people like this in the world. It’s my goal for the rest of the trip – to embrace the good in everyone!