Days six and seven were travel days for us. We were traveling from Dublin to Casablanca, with a night layover in Paris. Because of the recent attacks in Paris (just a week ago), our families were a bit concerned about our plans to stay close to the Eiffel Tower in Paris. We were also exhausted from our unexpected turn in the road the night before, and knew we wouldn’t be out sight seeing. So we did some research and found a hotel nearby the airport, actually connected to the airport. It was perfect. No taxi, or train, or bus. Just a quick walk through the airport and we were able to lie down and get a goods night’s sleep – much needed!

But, before we actually got into the airport, we had a bit of an…adventure?! The plane coming from Dublin was pretty small, and thus it didn’t drive up to a jetway. Instead, there was a flight of stairs leading out onto the tarmac, and then another flight and a half of stairs at the building that lead into the airport. Now don’t get me wrong, I’ve done these types of flights many times before, and while they aren’t the most comfortable, I do it without complaining. I usually just climb down the stairs from the plane to the tarmac on my butt, hop in my wheelchair, and find the elevator going up. 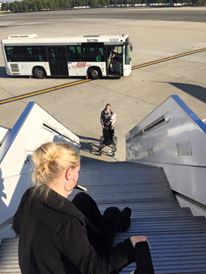 Today, though, was different. It was cold. It was raining. I proceeded down the isle way of the plane and onto the steps. The flight attendant had warned me that the stairs were wet due to the rain, but I knew I was headed straight to the hotel and opted to just get wet (rather than wait on assistance…which can often take up to 30 minutes). So I hustled down quickly thinking that the faster I went, the less wet I would get. Tony had my wheelchair waiting at the bottom of the ten stair flight and I hopped in quickly, grabbing my bag from him and rushing towards the building.

But as I drew closer to the building, two women, who somehow knew my name, asked if I needed help up the long flight and half of stairs. Tony and I both looked at them simultaneously and said, “Yes,” hoping they would hear the urgency in our voices. We were, after all, standing in pouring down, ice cold rain.

We waited a few minutes as they chatted in French and communicated over the radio speaker. “Unfortunately, we don’t have a lift that goes up,” and they looked at us a bit apologetically but not sure what to do from here. Tony was asking them questions about what the procedure was and how we were supposed to get inside as I started the climb up the cold, concrete, puddle-covered steps. I knew about three steps in that I was doing to be drenched. But what other option did I have? So I climbed up, in the rain, and got soaking wet. Thirty minutes later I was in the hotel room with a nice pair of sweat pants on, washing my dirty jeans in the bathtub with body wash and hot water. The rest of the evening was relaxing with time to catch up on “life.” We had a good wifi connection and took advantage of it. 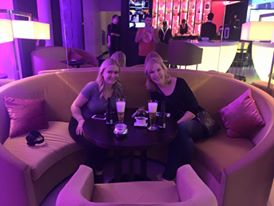 The next morning we were up bright and early – 4 am – for our flight to Casablanca. We met my sisters, Julie and Natalie, and my mom, Amelia, at the airport in Paris. It was time for the next part of our journey.

We arrived in Casablanca around noon. Our room wasn’t quite ready for us so we left our bags at the hotel and found a very cute little restaurant nearby to have a few beers from Casablanca. The beers were called “Casablanca,” and were a light lager beer. Crisp and refreshing. A few drinks later and we were back at our room. Everyone was tired from the long day of travel.

We woke ourselves early evening and Amelia and I went venturing out for an ATM. No luck, but we did enjoy the evening ambience of the city, followed by dinner at our hotel. We had chicken, and lamb, and fish, all cooked traditional Moroccan style, and very, very tasty. Our dessert was a fruit salad, which was impeccable. Small pieces of apple with bits of kiwi and pineapple, covered in the sweetest syrup. Yum!

The Moroccan part of our journey was just beginning and I was so excited about the culture, food, and people! 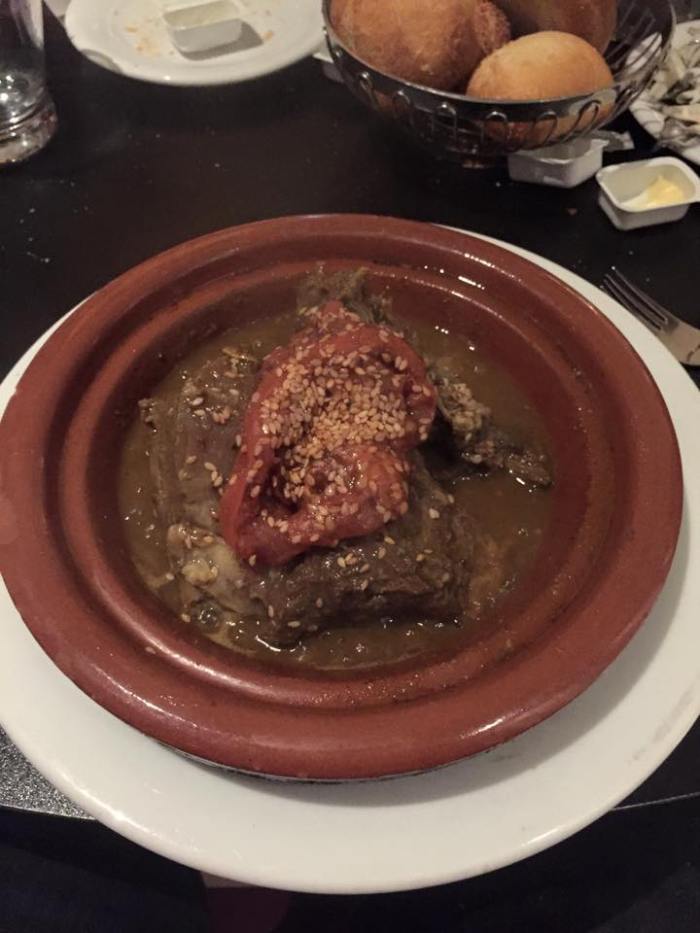 As a side note, I think it’s important for everyone to know that we are very carefully monitoring the situation going on in Paris and the rest of the world right now. We, like many people, are determined to not let this stop our trip or our lives. However, as with all things, please know that we are taking proper measures to be sure we are as safe as possible.