One of the things that we had to do while we were in Istanbul was a belly dance show. Popular in many Muslim countries, and something we had never done, we planned an evening out of it.

My mom had found a brochure in our hotel’s lobby, and on the front, in bold colorful letters, was written “Family friendly! Food and wine included!” It was perfect for what we were looking for. We had the hotel book our reservation and later that night a large van picked us up.

Unbeknownst to us, we would be making many stops at different hotels to pick up multiple tourists for the show. The van, which held probably 12 or 14 people, would be full after an hour of driving around Istanbul.

After the third stop, I heard my sister, Julie, seated behind me, lean over to my mom, “Have you noticed that all the passengers we are picking up are single businessmen? Are you sure we’re in the right van?” They exchanged whispers for the next 20 minutes while my brother, Matt, and I just rolled our eyes. My youngest sister, Natalie, just sat quietly next to me and observed. This would her role throughout the entire experience.

“Come on ladies, just enjoy the experience. Embrace the culture!” We finally told them. But I think we both knew deep down that something was a bit off about this trip, especially as we picked up our last passenger, the eighth single male.

As we approached the club…theater…performance hall (I can’t remember what the building was called), it became obvious that it was located in an area of town that was clearly full of nightlife. Bright lights lit up the streets and beautiful people roamed all over. We entered the building and were directed downstairs. We took an elevator (obviously and fortunately), but noticed that the carpet on the stairs was bright red, like we were in Hollywood.

We took our seats downstairs at a table reserved for us. There was a stage with about 10 tables that sat five guests each surrounding it. The evening began with wine and bread, followed by several entrees and dessert. I thought it was delicious and I was excited for the show to begin, but I could see the skepticism on my family’s faces. As we waited for the show to begin, I took a look around the room and noticed that we were the only family in the audience. The rest of the room was filled with middle-aged men from all over the world.

About halfway through our meal, the lights dimmed and a woman dressed in a bright purple skirt – long, touching the floor, covered in jewels – and a top that matched – covering as much as a bikini top would – appeared on stage. She smiled, held her hands in the air like a princess, and began doing her belly dance. She performed for about seven minutes, dancing and moving her hips more gracefully than I can ever imagine (even if I had the ability to stand up and try!).

A few minutes later another equally as beautiful woman appeared and they serenaded each other with their movements across the stage. The first dancer disappeared shortly thereafter and this cycle of exchanging dancers went on for quite some time. 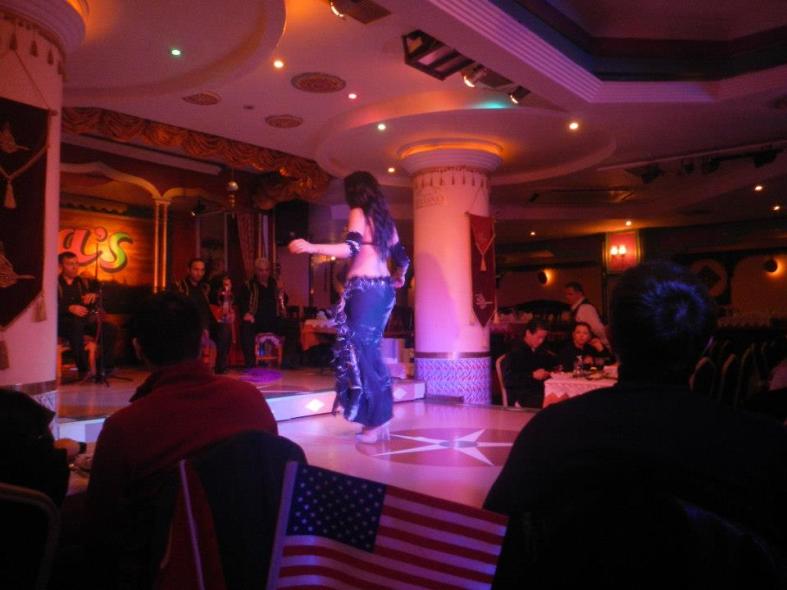 After two or three dancers, though, it did get a little odd. The single businessman began putting money into the dancers’ waistlines. The dancers would shake their way to the edge of the stage and ‘poof!’ they became a little bit richer. It felt very much like a strip club in The States, although much more conservative.

My family became outraged! “This was supposed to be family friendly,” they kept saying. And soon my brother was standing outside of the performance room in a very heated argument with one of the staff members. We could hear his voice rising, arguing with the man. One screeching in English, the other bellowing back in Turkish. My brother just wanted a refund for the false advertising; the Turkish man just wanted us to leave. The language barrier made the argument humorous but completely useless.

We knew it was time to go before things developed and we ended up in a Turkish prison. We grabbed Matt and headed outside, the Turkish man slamming the door behind us. It was midnight and we had no idea where we were. I pulled out a map (thank goodness I actually learned how to read a map in elementary school) and we found that we were only six blocks from the train.

We began our walk. It was cold and sleet was falling from the sky, hitting our faces like pellets of ice. But we found the train and made it back to the hotel an hour later.

The next morning at breakfast, I told my family, “Guys, I don’t understand what was so offensive about last night. It was a cultural experience and I thought it was neat.” They all looked at me, and boy did I hear it from all of them that it was inappropriate. I guess beauty really is in the eye of the beholder.

One thought on “BELLY DANCING IN TURKEY”