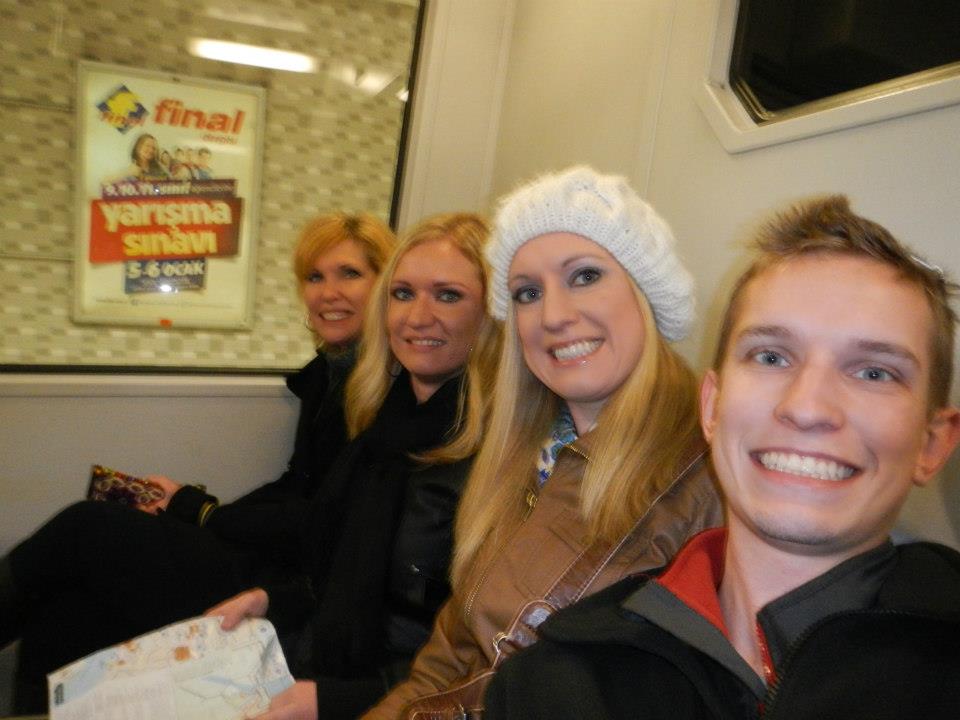 About 95% of Turkey is located in Asia. And at that point in my life, I hadn’t been to Asia yet. So I was thrilled with the opportunity to visit the Asian side of Turkey and check yet another continent off of my bucket list.

While all of Istanbul is located on the European side, just across the Bosporus straight lies Asia. We planned an afternoon outing for this event and that day we took the train to the ferry.

The train in Istanbul is one of the best I’ve ever experienced (outside of perhaps the Hong Kong MTR). It’s simple – there’s only one line with very quick and smooth stops. And anyone using a wheelchair didn’t have to pay. It was extremely accessible and easy to just wheel right into. We became quite accustomed to the train and it was our most used form of transportation. In fact, one evening, we took the train for an hour and a half ride outside of the city, expecting to see some of the countryside in Turkey. Instead, the sun set and it became quite clear that we shouldn’t go much further from the city. It was becoming full of all locals and we didn’t know the language. We weren’t sure of our safety so we turned around; a very uneventful ride it was.

Anyway, on the day we went to “Asia,” we bundled up as we weren’t sure if the boat taking us across the straight would have indoor seating. It did (fortunately) but the rest of the trip we were very thankful for having our jackets, hats, and scarves. After our short train ride, we walked about a half-mile to the boats. We stood in line and found an automated machine that would dispense tickets for the ferry. We struggled at first with so many options, but everyone in Turkey was so nice – the nicest people of all the places I’ve ever been – and a few locals helped us find the right option for us.

The boat wasn’t super easy to get on and involved a piggyback ride from my brother. It made me nervous as the boat was noticeably rocking and I knew the water would sting like a thousand needles if he slipped and we fell in. But like always, he very gracefully stepped down a few wooden steps and over the gap between the boat and the pier. I swear, his long legs sure do come in handy!

Once inside, we found a seat and made ourselves comfortable for the 20-minute ride to Asia. We were the only people on this boat and I couldn’t figure out where all of the other tourists were. We got off the boat the same way…carefully but gracefully.

I had a map that helped direct me to the busier section of the neighborhood we were in. We made the short walk and found a few restaurants where we planned to get a snack. There wasn’t much else to do on this side, so we planned to enjoy the coffee and just chat. The restaurants were all packed (it was very, very cold outside) but we found a café that had an open table in the back. We seated ourselves and looked at the menu. We couldn’t understand any of it. And there wasn’t an English option. So what do you do in this situation? You pick and point. And that’s what we did. The staff was not very welcoming, unlike the European side we had become acquainted with, and no one spoke a lick of English.

We sat and observed the culture. We were the only Americans in this restaurant. We had truly gotten away from the center of Turkish tourism. As the restaurant become more and more crowded, it became evident that we needed to get back to the European side. We finished our food and coffee and started the walk back to the ferry building to buy our tickets.

We figured we had mastered the machines by now, since we spent a good 20 minutes trying to figure it out on the way here. But we were wrong. There were four times as many machines. None of them were in English. And no one around was able or willing to help. We spent an hour and half putting coins in, getting a ticket, and walking up to a gate to see if they would let us through to the boat. And when they would not, we would do the same thing again, this time with a new machine that spit out a different ticket. We repeated this several times until we were finally able to get on a boat that we hoped and prayed would bring us back to the European side.

And as the boat pulled up to a dock, albeit a mile from where we had originally departed four hours earlier, we all sighed with relief that we were back “home.” We found the train nearby and headed back to our hotel. The afternoon was exhausting, with a little bit of uncertainty and fear, but we made it back. And most importantly, I had finally visited Asia.

I found out years later that my impression of Asia based on this experience was skewed. We had a bit of bad luck and were not at all prepared for the language and cultural barrier. Today, I think Asia (or at least the parts I’ve been to) is a fabulous place!

One thought on “THE ASIAN SIDE OF TURKEY”