One of my favorite things about traveling internationally is my non-working cell phone.  And everyone else’s.  There’s nothing to look at, nothing to read, nothing to be uploaded.  We are forced to enjoy each other’s company.  So I was thrilled for our “day at sea” on the Mediterranean, with no stops and no access to the Internet.  Plus, our ship was gigantic, and beautiful, and we hadn’t gotten much chance to explore it.  So exploring we would do! 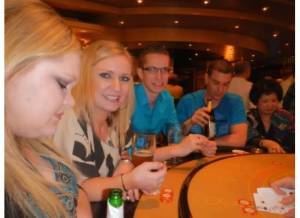 We slept in that morning and after brunch, found ourselves in the casino.  Most of us weren’t big gamblers or had ever played Blackjack.  So when the very nice European man asked us if we wanted to play, we hesitated but all sat down at the table.  It was incredibly cheap, something like 3 euros for each hand.  He guided us through the process, nodding his head, and winking, and gently patting our hands to tell us when we should ‘hit’ or ‘stay.’  I’m sure he was enjoying the three blonde girls from America all giggling at the game.  We spent a few hours there, playing Blackjack and getting to know all about our dealer.  It was probably entertaining for him as well, considering we were the only ones in the casino for several hours at a time.  I could imagine the loneliness he had, hours upon end, waiting for just one person to come in and lay some coins down.

Before we knew it, dinner time had arrived.  We headed back to our rooms to change into formal attire for the evening’s dinner and show.  Dresses and heels, suits and ties.  The five-star dinner was spectacular, and full of entertainment from the staff.  After several bottles of wine, and very full bellies, we agreed we would change clothes (yet again!) and meet back at the casino.  But now we were feeling a little bit of orneriness inside of us!  Matt and I wanted to race Julie and Katie back to our lower level cabins – two teams to see who could get there the quickest.  We had opted for the cheapest cabins the cruise line had to offer, knowing we would be spending little time in them, so we had to go down several elevators and weave through several very narrow hallways.

We both took different routes, running in our formal attire, thinking we were outsmarting the others.  Matt pushed me fiercely, taking the turns sharp and not stopping to look for people passing by.  I made a racecar noise with occasional beeps to alert anyone that might not be expecting a racing wheelchair.  “Vroom, vroom.  Beep, beep.  Vroom!”  When we made it back to the room, Katie was the only one there.  We were confused.  Where was Julie?

Katie could hardly keep it together though.  She was laughing so hard.  Matt was out of breath from sprinting through the hallways.  And I was just sitting in the room, waiting for someone to explain what was so funny?!

“Raaahhhhr!!!”  She screamed.  And then she realized it wasn’t Matt or me.  It was housekeeping coming to turn down our beds for the night.  She stopped suddenly, then out of embarrassment, ran for the door and down the hallway.  Katie was left alone in the bathroom, door hanging wide open, still using the facilities.  The housekeeper must have quickly mumbled, “I’m sorry.  I’m so sorry,” over and over again as he left quickly, more embarrassed than either of the trouble-making girls he had just encountered.  For the rest of the days on our trip, our housekeeper entered cautiously, always asking if he could come in before opening the door too far.

After Julie arrived back at the room, twenty-some minutes later, we regrouped and decided to head to the upper deck, where there was a nightclub.  And what an amazing nightclub it was!  It was a small platform that hung over the back end of the ship, probably twenty stories in the air, and enclosed by glass.  It felt like we were floating on water and air all at the same time.  Looking out the glass, all that could be seen was the dark sky and some clouds.  And when I looked down, I saw a few waves crashing.  It gave me the chills to think that only two, maybe three, thousand people were on this ship, and we were all alone…hundreds of miles away from anyone.

The club was bursting with a hip-hop beat, and beautiful European dancers filled the floor.  We all grabbed a few beers and watched for several minutes as they gracefully took over the club floor, most of them hired workers (or at least that was our assumption).  It was warm in the club, and the drinks were going down fast.  Before I knew it, we had joined the dancers on the floor and were having a great time twirling and shaking with the music.  We were nothing compared to the dancers on the floor, but there was a brief moment of misjudgment when Mike came up to me and said, “Renee, hold my feet in the air!  I’m going to do a handstand like the other dancers.”  So we tried.  And we failed.  But it was a great attempt…and an even better memory. 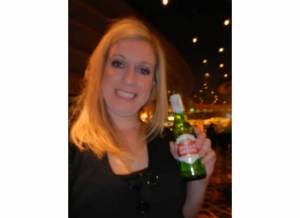 Hours later, we left the nightclub, dozens of Stella Artois’ consumed.  We stumbled back to our rooms in the middle of the night, heading straight for bed…no teeth brushing or face washing.  Just sleep.  The next morning we woke up, everything aching from the nightclub dancing and our heads pounding from the many, many Stella’s we each had.  We like to refer to that night as “the night we got in a fight with Stella.”