During a visit to one of the markets, I was getting extremely frustrated at how dirty my hands were. My hands getting dirty while traveling has always been a struggle of mine. You see, I use my hands to propel myself, and while traveling, I’m propelling myself a lot more than a typical day in The States. And often not on sidewalks or streets, but rather dirt roads or stone paths. This is exactly what the market was, a big plot of dirt with rows and rows of tents and vendors. After just five minutes, I could feel the grime of dust just clinging to my hands. But I knew we would be here for a while so just chose to ignore the dirt, mindful not to touch my face or clothes. 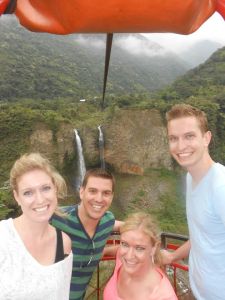 When we finished browsing the foods – fruits, vegetables, spices, meats – and the trinkets that local markets tend to carry – rugs, purses, statues, jewelry – we headed back to the bus to meet up with our group. We had about 20 minutes until we were leaving, and since I knew we would be on the bus for a few hours after the market, I started to look for a bathroom with running water to clean my hands. I had no luck. So, I pulled the bottle of water out of the backpack we were carrying and attempted to clean my hands with it. Pouring drops of water over my hands, and rubbing them together, I realized that it wasn’t working and that I was just creating mud. My frustration with having filth all over my hands, the one thing I used for everything, was oozing out of me. Finally, Julie looked at me and said, “Let’s go to this local grocery store. Maybe we can find something in there to help.”

Reluctantly, because I am stubborn, but mostly due to frustration, I followed her into the store, dirt up to my wrists. We paced the isles, looking for something that might help clean me up. Suddenly it dawned on her. “Baby wipes! Why don’t we just get a pack of baby wipes and you can use those to clean yourself?!” 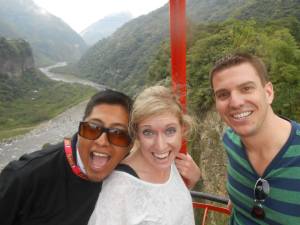 “You’re a genius!” I said in relief, wondering why I hadn’t thought of this years ago. I could carry these in our backpack everywhere I went and always have clean hands – something that has been so frustrating to me on so many trips. So we searched the isles, found a decent size pack of Johnson’s baby wipes, and headed to check out. In line to pay, I saw a small bottle of hand sanitizer, which I swiped up quickly thinking it couldn’t hurt to be too clean.

As soon as we left the door, we stood on the side of the dirt street and I successfully cleaned my hands. Cheers to the baby wipes! It was the most refreshing part of my day. I carry baby wipes and hand sanitizer with me on all my trips now. And they are used at every restaurant, café, and subway station…and sometimes on the corner of a street when I can feel the dirt from a sidewalk just gnawing at my palms.

Our next stop, after the market, was the Continental Divide. I had visited the Continental Divide in the Rocky Mountains growing up, so I was excited about this. It felt exactly the same – cold, elevated, and air stripped of oxygen. The wind was brutal that late morning, hitting our faces like pellets of ice. We didn’t stay long, just enough time to grab a few quick pictures, before we hurried back to the bus to keep warm.

We also drove down the Pacific Coast Highway on this trip. The PCH runs from Alaska to the southern most tip of Argentina. It touched home a little bit as I had been on the PCH in California just a few short days prior to visiting it in Ecuador. How small the world really is, I thought. It has always been a dream of mine to drive the whole road, north to south, in a purple El Camino. I hope that I can visit this same spot someday, on my trip down the PCH.

“Our next stop is not listed on the itinerary,” Antonio announced, as we were getting ready to leave. “But I don’t want you to miss this. Do not feel like you have to participate in this next activity, but I would really like you to. It will only cost $1.” He went into further detail describing a cable car that ran across a giant gorge with a beautiful river flowing underneath. He explained that the tour company would not allow it to be listed on the itinerary, as the cable car operations did not carry insurance.

A few minutes later, Carlos pulled off on the side of the road and we all unloaded, walking carefully along the street to an older building standing alongside a very steep cliff. Inside the building was a motor, which appeared to be from 1950, that was operating the cable car. There were a few steel wires holding a very old, red-painted metal car above yards and yards of empty space. Roughly a mile or two below the slow moving car was a small river surrounded by rocks that looked more like swords waiting for their next victim.

Antonio stood by the gate to the cable car, helping about six to eight people board each time. We watched as groups of our tour would slide down the steel wire, hang in mid-air for minutes at a time, and then launch back to the main platform. Our small group was last in line, all of us uncertain if this was a good idea. For a brief second, I had decided I was just going to watch and that would be enough of a thrill for me. But reality kicked in quickly and told me that this was a once-in-a-lifetime opportunity, and not to miss out on the adrenaline rush.

As we approached the platform, I reached out my shaking hand and dropped my gold $1 coin into the operator’s hand. We made our way to the gate of the cable car, and as it swung back and forth, hanging in mid-air, four men picked me and my chair up and carried me into the car, straddling the platform and the car to be sure I didn’t fall. I was told to go to the front of the car for the best view, although given the size of the car, I wasn’t sure it really made a difference. But nonetheless, I moved as far to the front as I could, and before I could even grasp hold of the metal rail in front of me, we were swooping over the river. Since we were the last of our tour group, Antonio joined us on the ride. He told us to put our hands up and let the wind blow against us. And we did! We screamed, laughed, and had the adrenaline rush we were looking for, the kind that only happens once in a blue moon.

After a few minutes of hanging mid-air, we were flung back to the platform. We left the cable car giddy with excitement, and ready to do it again. Sometimes it’s the little things in life that are the most thrilling. This one was $1.