I’m not much of a shopper.  I never have been.  I find “things” to distract me from what I’m looking for out of life, and I just don’t get much enjoyment out of it.  However, as the famous saying goes, “When in Rome…”

Tony is not much of a negotiator when it comes to shopping, so that burden was on me.  He would pick something out, then hand it to me to do the actual purchasing.

“How much?” I would ask, holding out the item.

I shake my head and propel myself away.  And seconds later, they are chasing after me.  “Ok, fine, seventy.”  And we walk away, prize in hand.  This goes on for hours, Tony picking things out, me playing barterer.  At one point, Tony was virtually leaping through the street with excitement about all of the things he had gotten for so cheap.  He chanted, “It feels like play money.  It just doesn’t seem like it’s real.”

The joy of watching Tony have so much fun was rewarding for me.  It’s a pleasure to travel with someone who can have fun and just love every experience they are given.  Remember this when traveling – always go with those who can enjoy the moment, as the moments pass quickly and they are soon just memories. We all need more of “these” types of memories.

The biggest purchase we made in Hong Kong was two suits and a few shirts for Tony.  And actually, I had nothing to do with this purchase.  I was just along for the ride.  Literally!

Custom tailored suits are the hot item for men in Hong Kong. And so Tony had budgeted enough money to buy one custom made suit. Like the pearls, we went in knowing what we wanted to purchase and left with three times as much.

Sam’s. That was the name of the tailor. It was a tiny little store, about 100 square feet. It was in the middle of building. We entered in an opening and walked back to the very far end of the building and around the corner until we found Sam’s. The walls were lined with fabric from the floor to the ceiling. The back left wall had a counter with six or seven people surrounding it, all grasping for books of fabrics and chattering among themselves and with the workers. The other side of the room was lined with men, arms extended, as workers took down all of their measurements.

It was a bit overwhelming just walking in, not knowing how we would get service in a place so full of people. But immediately, Sam himself greeted us and began the process. He asked Tony what he was looking for and quickly handed us a book of fabrics to choose from. We chose one quickly and handed it back to Sam. He told us to pick a second fabric, which we did, although we were confused as Tony was only buying one suit (or so he thought).

After we chose the fabrics, Sam disappeared for a few minutes. I assumed he was helping another customer. When he appeared moments later, he handed San Miguel beers to both Tony and me. I cracked mine open while Tony his took place to have measurements taken. I maneuvered myself to a corner so that I was not in the way of the dozens of people crammed in the tiny store, although I’m sure my presence in the corner was still a little annoying for those trying to purchase suits.

I sat in the corner sipping on my beer and watched all of the people going about their business. The hustle and bustle of another culture, much like my own, but so different this time because I wasn’t apart of it. I watched wealthy couples come in together to gawk over the fabrics, and another young man come in alone, probably a business traveler. All of these people buying expensive suits for something they each thought was important.

I started thinking about the hundreds of people that entered Sam’s store each day. Hundreds of suits to be made, all within a week’s period of time. Where were the suits made? It couldn’t have been in this tiny little store. Who made the suits? Was there a location somewhere outside of Hong Kong that Sam sent all of the countless measurements to so each suit could be made? It was an incredible process, whatever it was.

I started thinking about names.  Sam’s.  That wasn’t a Mandarin name, was it?  And I started looking at the name tags of the workers.  Such different names than what I was used to.  No Renee.  No Tony.  No Barbara, or Susie, or Matthew, or John.  Such different names.  And I started thinking how much a person’s name can define them.  Was Sam more successful than other tailors because of his name?  Or was it his service? As I was thinking about Sam’s business and how he may have gotten started, he leaned over me and handed me another beer. I must have been thirsty as I hadn’t even noticed my first one was empty.

Tony ushered for me to join him at the purchasing counter. We talked back and forth for a while, and after several minutes, Tony was signing the papers for two suits and three shirts – all custom made. He had the biggest smile on his face as Sam handed me one more beer, told me to enjoy it on the sidewalk (in Hong Kong this is legal), and began pushing me out of the store. He gave me a ride (literally) around the corner, through another hallway, and towards the exit of the building when he took a sharp right. I was confused where we were going as this was not the way we had entered the building. A few seconds later I saw the ramp. We had managed our way up a few steps to get in, so this was a pleasant surprise. We waived kindly and gave our thanks to Sam, promising him we would be back in a few days to pick up the finished suits.

I usually get very upset when someone tries to help me without asking first. It makes me feel like I’m incapable. But for some reason, Sam just had a kindness about him that I couldn’t resist, and I embraced his helpfulness that afternoon. 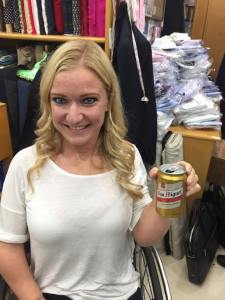 A few days later, when we arrived back at the store, the same intensity filling the room full of customers, Sam again greeted us. He immediately looked at us and said, “A beer for the lady?” I nodded my head, smiled, and took my place in the corner while Tony finished his final fitting.

Moments later, we left, both of our arms full of market purchases and his new suits. We had one more purchase to make before we left Hong Kong that evening. We needed another suitcase for all of our newfound “treasures!” We quickly found a store full of luggage and purchased the cheapest suitcase. It was packed full of gifts and goodies for our loved ones back home.

Please be sure to read Tony’s rendition of our Sam’s experience here.