A few weeks before our trip, riots and demonstrations over democracy had begun in Hong Kong. The news was flooded with storms of people fighting and trying so hard to change their government to a democracy. We had been watching the media carefully to be sure things were still safe for us to visit, and coming up with a backup plan in the event the riots did not settle down. Fortunately, the demonstrations took care of themselves and it was safe for us to visit. I had completely forgotten they even occurred when we left…

It was about 9 am when we were struggling to find our way across a 4-lane highway to get morning Dim Sum, which ironically was at a restaurant immediately next to City Hall. There were barricades everywhere and we just couldn’t seem to find a way around them. Lots of fencing and construction blockades all piled up. It appeared the road was closed and undergoing a major reconstruction. I was so frustrated and getting cranky as we walked blocks out of our way just to cross the street. We finally found our way across the highway and around the barricades. And when we realized what was going on, the most humbling feeling came across me.

We were literally s

tanding in the middle of the street where the riots and demonstrations from just a few days ago occurred, surrounded by leftover umbrellas, tents, and posters. It was one of the quietest places I’ve ever been, completely abandoned; everyone gone back to their lives, defeated. I’ve never experienced a feeling like that before. And I doubt I ever will again. I was in a city of millions, just looking around at the destruction and the passion these people had. It was somber, sad, and inspiring.

The event itself was named the Umbrella Revolution as the people of Hong Kong used umbrellas to demonstrate and fight for democracy. There were small villages of tents that were clearly used for housing quarters for what I can assume were weeks at a time. All of this, just abandoned and left to a few street workers to clean up.

I couldn’t help wondering at what point the people decided to succumb to the government and go back to their daily routines. How difficult it must be to fight so hard and so long for something that you are so passionate about just to turn around and walk away. I have no idea what the punishment is for the local people of Hong Kong. Did they still have their jobs? Would they have fines to pay? How did this strong passion affect their families?

As we walked along the street, just taking in every moment of this, we found ourselves not wanting to leave. It was the strangest thing, wanting to stay on that street feeling horribly mixed emotions just bubble up from somewhere deep inside. A couple of things really struck me as we marched along this empty street. 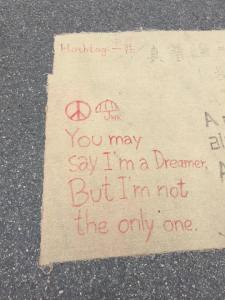 The first one was the posters, and one in particular. It was a large poster, about the size of a dining table with seating for six, strewn out on the ground. It had several words of inspiration on it, including a saying from John Lennon. “You may say I’m a dreamer, but I’m not the only one.” I couldn’t help but think how true this phrase was. I had heard this hundreds of times before, but it resonated with me differently in Hong Kong on that street. I found it astonishing that a legendary British man singing about his dreams from the other side of the world had such a connection with this event. It was a reality for me, realizing that we all have dreams. And what was even more awakening for me is how trivial my dreams were. I had the whole world at my fingertips. Everything I could ever ask for. These people wanted freedom. A say in how they lived their lives. And they had to fight for that. I am so fortunate that I’ll never understand how that truly feels.

The second thing that struck me that day were the few remaining protestors. At the very end of the street, as far away from City Hall as you could get, there were about a dozen tents with people surrounding them. They hadn’t left. It had been a week and a half and they were still there, unwilling to give up the fight.

We finally made our way to the Dim Sum restaurant, and what an experience! Dim Sum is the Asian version of Spanish Tapas. We were seated at a table near a window overlooking the bay. It was beautiful.

Waitresses with carts of food would come around every three to five minutes and ask, or rather gesture, what we wanted. The payment system was simple. Each plate was roughly USD$5. The waitress would stamp the bill on our table and we paid at the end. And while we couldn’t understand what the kind servers were trying to offer us, the ends of the carts had each selection in English. So with a simple pick and point process, we soon had a table full of food. I wanted to try it all, and I pretty much did! And the best part was that we only had chopsticks. My “chopstick skills” certainly grew on this trip, and I can now even eat rice successfully and gracefully.

Later in the trip, we were in a cab with a driver who spoke very little and broken English. He clearly knew we were from The States and couldn’t resist bringing up the Umbrella Revolution. While I didn’t get much from the conversation due to the language barrier, I did get his passion for wanting democracy. And all the while, I kept asking myself why? This city was amazing. So clean. Full of such genuinely nice people. It appeared to be so well run and I just couldn’t understand why they would want to change that. I guess it’s fair to say, “Never judge a book by its cover.”

Ironically, the riots started up again about a week after we got back to The States. I will always have a special place in my heart for the people of Hong Kong. And I hope that someday very soon they can have the same freedoms that I take for granted everyday.