A good friend of mine introduced me to an app called “Maps with Me.” It’s an excellent app that allows you to download maps for cities you will be traveling in and then uses GPS to show you exactly where you are at in that city. While the free version doesn’t provide directions, it’s extremely helpful when you are lost (which is most of the time for me)!

So here we are on our way to the train station, a paper map of the entire train system in one hand and my iPhone in another, with a map and a blue arrow on my screen moving as we walk. As I obviously have both hands occupied, moving myself is difficult. But with a few stops at intersections to make sure we’re on the right path, and placing the maps on my lap for intermittent time periods, we finally make it to the train station. Or at least we thought. We stare at the 3 steps going up followed by two long flights going down. Hmm. Well this isn’t going to work well. 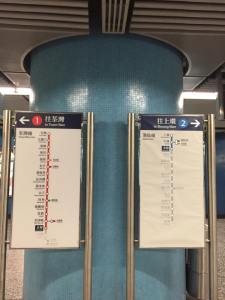 As we stand there staring at each other with frustration, a young woman selling newspapers comes up and points in the direction we were heading. She politely takes my map and points to another train station, or rather the same one but with a different entrance, that has an elevator. Whew! Problem averted, and not a single word was exchanged. It still amazes me every day how human beings are able to help, truly help, one another without ever expressing in actual words what they need.

We head the way she directs us and low and behold in about two blocks there’s an entrance with an elevator. We make our way downstairs and to the customer service counter. I had read that it’s most cost effective to buy a pre-loaded card, called an Octopus card, which can be scanned for each train ride. Given that we would be using the train several times a day for a week, we went this route.

The train itself was phenomenal. I’ve been on a lot of public train systems and this was by far the cleanest, most smoothly run system I’ve ever seen. The system itself is much older than I am. And if I took care of myself the way that the Hong Kong people took care of their public train system, I would look like I’m still in 3rd grade. Now of course things like $750 fines for eating or drinking, even water, certainly help with keeping it in tip top shape, but I give all credit to the people and the respect they have for taking pride in their collective property.

Once we were safely on the train, which was extremely accessible and easy to board, I started making observations of all the people around me. I love to watch people in their everyday lives when I travel. To just sit back and observe. A couple of things struck me as I sat there in silence watching the locals go about their day.

First, aside from being the only blond, I felt like a GIANT! At 5’0”, 115 lbs., you would think I always felt small. And I’ve traveled to many places in the world. But for the first time in my life, I felt huge! The women in Hong Kong were tiny. Petite little girls with such fine features and frames. And their style! How did they learn to dress so elegantly? All of them, dressed like beautiful Barbie dolls. Their beauty is certainly something to experience. 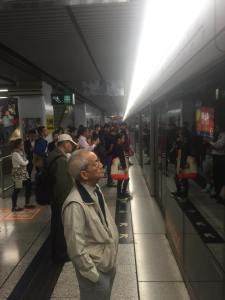 The other thought I had was that all of these people are going somewhere for some reason to accomplish something. And that all of these people appeared to have very normal lives. What were each of them thinking, the hundreds of people on this train? Were some excited to go to the next stop? Some dreading it? What good thoughts were going on in these people’s minds? What struggles were the other ones having? Again, it amazes me how we can sit back and know that deep inside each of us there is emotion, some good and some bad, but we all have it. It’s what connects us to strangers and people on the other side of the world.

We finally reached our destination and exited the train. We were in a mall. Yes, immediately after exiting the train, not the train station, just the train, we were inside of a several story mall. Now I knew Hong Kong was known for it’s shopping, but this was extreme! We learned that virtually every train station was inside of a mall. I guess it’s one way to keep the economy booming!

We managed to find our way to an exit. We couldn’t find an elevator, but there was an escalator going up. I learned a few years ago that I was perfectly capable of going up an escalator, and that it was quite easy. I position myself so that my front wheels go on the first step and as the escalator propels forward and up, I start to lean slightly back with the rear wheels on the step below the front wheels. I grab onto the handrail and up I go. (The same process works going down, just in reverse).

As it’s the first day, I had planned on wearing my pants for at least one more, if not two, days, so crawling up the stairs isn’t real appealing. So Tony gets behind me and starts pulling me up the extra long flight of stairs. Now usually I’m with a group of people and I’d just hop on someone’s back, have someone else grab the wheelchair, and we’d be up the flight of stairs in no time. It was a little more complicated this time having only the two of us.

It was about two steps into the 30 step flight when a very humble looking man came running towards us, made a gesture asking if we needed help, and ever so gently grabbed onto the front of my chair to help stabilize my ride up, despite us telling him we would be fine. 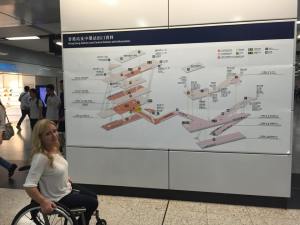 And two, the people of Hong Kong will always, I mean always, offer to help. I’m not sure if it’s their collectivist culture or their religion or their lack of liability issues, but it was one of the most refreshing things I’ve ever seen. And even when we turned down help, they would walk a short distance in front of us, constantly looking back, just to be sure we made it up the stairs. It felt like this was what humankind was all about, something that was missing from my day-to-day life, and I just wanted to feel more and more of it.