This was a different trip for me. I was traveling with my boyfriend and not my usual travel group, which usually consisted of my sister and brother and a mix of other friends joining along, depending on where we were going. I had never traveled internationally without this group, more or less with just a boyfriend. It was also my first time traveling to Asia. Well, technically, I had crossed over to Asia on a trip to Istanbul, but let’s face it, crossing a river and spending two hours there hardly counts as Asia, although the food, language, and inability to get back to the European side might indicate otherwise. Anyway, that’s a story for another time.

It had all started when I moved from Ohio to San Francisco. I was the closest I’d ever be to Asia while still living in the states, so I figured why not go to Asia now? And I had decided a few years ago that I wanted to go on four international trips every year. This would be the last one for 2014. My boyfriend was a big flight geek, always watching for cheap flights and figuring out how to best optimize miles. He found a cheap flight – $652 round trip to Hong Kong. He told me about it and an hour later I had talked him into coming with me and the tickets were booked.

We left San Francisco that morning knowing we had three flights and 26 hours of travel time ahead of us. It’s amazing how mentally preparing yourself for a 14 hour flight can make it seem like no big deal. We arrived in Hong Kong around 10 pm, Hong Kong time. I have no idea what time this is in the USA. Exhausted and covered in “airplane funk,” we made our way outside to find a taxi to our hotel. As soon as the doors opened and I felt the fresh Hong Kong air hit my face, I had a burst of adrenaline. I was here! In Hong Kong! This experience was all mine and I was going to relish in it. 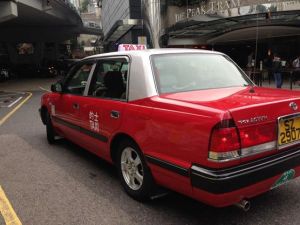 We found our way to the line of taxis. The taxis were red, barn red. And covered in white writing. A combination of English and Mandarin. “How awesome is this?” I kept thinking to myself. I was in a country where people communicated using symbols. It blew my mind. These taxis (which I later discovered were the same in all of Hong Kong) appeared to be from 1985. Toyota Corollas, I believe. It was strange that they were as old as me, or so I thought. We later discovered that they were made to appear old and that they were in fact relatively new.

I hopped in the back seat and waited for my boyfriend and the driver to put my foldable wheelchair in the trunk. I heard a lot of clanking around and figured they were just having a hard time getting it to fit. Finally they got back into the car and my boyfriend calmly said, “We had to tie the wheelchair in with bungee cord.

“What?” I screeched, knowing all too well that my wheelchair was on it’s last leg and thinking about the handle that kept falling off in the previous few weeks.   I was sure we would get to the hotel and be missing part of my chair. But what was I to do at this point? We were already driving forward with a driver who couldn’t speak a lick of English.

At a stop sign near the exit of the airport, where other guests were getting into cabs, the driver looked back with an expression inquiring where we were going. I said, in the most pronounced English possible, “Best Western Harbor View Hotel.” A blank look. No expression from him. I repeated myself again. Nothing. Finally he threw his hands up in the air with exasperation, pulled forward to a woman with a small stack of papers, and rambled a short phrase of what I can only assume was pure annoyance with the Americans in his back seat. She opened my door, asked where I was going, and I confirmed by pointing to the name of our hotel typed out on her piece of paper. The papers were a list of hotels in Hong Kong, written in English in the first column and Mandarin in the second column. She pointed to the same hotel, in Mandarin, while showing the cab driver, and we were off. Genius, I thought! Why did other countries not do this? We would have spent hours trying to communicate to the humble and native driver without this list.

The drive to the hotel was long, beautiful, and amazing. Sitting in the backseat, leather of course, just admiring the skyline. I had no idea what the terrain was like in Hong Kong. Was it flat? Hilly? Were the streets straight? Curvy? We drove for an hour in this cab, all the while I was thinking about whether or not I would have a functioning wheelchair when we arrived at the hotel…

As we took the exit from the freeway to Western Hong Kong, where we were staying, I noticed a large hill at the end of our road. All I could think was that our hotel was at the top of this hill, a 45 degree incline, and that we would have to make the trek up this hill everyday. I was a bit panic stricken when our cab turned right, literally right before the incline started, and pulled up to our hotel. It was a blessing, a true blessing to not have that giant hill looming over me. Although if there was a hill here, where else were the hills? Was the city built on hills, just like San Francisco? I was too tired to think about the limitations I might have in seeing Hong Kong and put that in the back of my mind for the rest of the night.

I patiently waited while my boyfriend and the driver untangled my chair from the back of the car.  As it came around the side, I quickly scanned it for any noticeable damage and cautiously sat down on the seat.  Everything was in order and it was working just like always.  Maybe this wasn’t the driver’s first time strapping a wheelchair to his car after all.  We paid him, in Hong Kong dollars which we had pulled out of an ATM at the airport. The exchange rate was USD$.13 to HK$1. The trip was something like HK$400. It felt strange spending so much on a taxi ride. We headed to the front door, made our way to the lobby, and finally got to the front desk where I was sure to request a handicapped room. The website indicated that they had them, but availability might be an issue. I was relieved to find that the hotel did in fact have a room with a handicapped accessible bathroom. 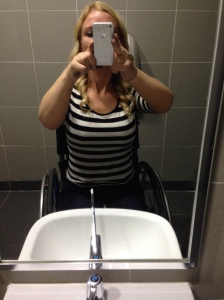 The room itself was small, the smallest of all hotel rooms I’ve ever seen. A double bed, with about 8 inches on each side, a small table, and a bathroom. I remember thinking, “This sink is so small!” I couldn’t figure out why, and I still have no idea why the sink was not sized proportionately. The bed looked so comfy, especially after a day and a half of traveling. We brushed our teeth, barely unzipped our bags, and crawled into the bed. E-v-e-r-y spring in the bed protruded at the tiniest amount of weight. It was like sleeping on a shipment of slinkies. But within moments, our eyes were shut and we found ourselves in a deep, deep slumber.

We awoke the next morning, more rested than we could have ever imagined. It was early, about 5:30 am, but the excitement and thrill of knowing we had a whole city to explore was enough to get us up and showered in no time. We pulled out our travel book, map, and computers and started chatting about what we wanted to do on the first day. It was about 15 minutes into our conversation when Tony, my boyfriend, stopped suddenly and said, “I don’t think it’s Sunday. I think it’s Monday.”

“No, it’s Sunday. We got here late Saturday, and have all of Sunday yet.”  We debated for a while, looked at all the electronics we had, finally Googled it, and laughed when we realized we had crossed the International Date Line and lost a day. I had been planning this trip for months, the entire time thinking we would have Sunday to tour. But nope, it was Monday already. “Oh well,” we said, “let’s have breakfast and go see the city!”

We had a simple breakfast that day, staying in the hotel so we could map out exactly what we wanted to see and the best way to get there. The food was very American – eggs, pancakes, oatmeal, cereal, and rice. I loved the rice. So much rice, at every meal. The Chinese eat rice at the end of all meals. It’s a cheap way to fill up in the event the main course isn’t enough. 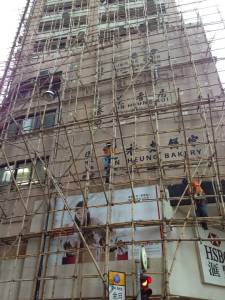 We left the hotel about 8 am that morning, walking out the front doors, taking a left, and seeing a street full of vendors. It was beautiful. An entire culture of people just going about their day-to-day life, and me just watching and absorbing everything I could. We started walking down the street and immediately noticed piles and piles of bamboo sticks laying on the side of the street. As we continued further, we noticed scaffolding made of bamboo. It went up, and up, and up, higher than I would have ever been able to imagine. All pieced together as the workers went higher, tied together with some sort of rope, perhaps from a tree as well. It was amazing, and so trustworthy. The smallest error, a missed knot or a weak piece of bamboo, and several people could lose their lives. “What it must be like to live without constant liability and attorneys,” I thought. And how resourceful human beings can be. “Of course it made sense to use bamboo,” I had to remind myself, opening up my small mind and thinking of the different ways people all over the world do things. 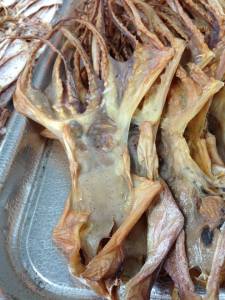 As we continued to stroll through Western Hong Kong, the least westernized part of the city (ironically), all I could think was “Oh, the smells…” It’s like nothing you will ever be able to experience in the states, and probably nowhere else in the world. Potent, strong, and varying smells. We walked by blocks and blocks of Asian foods, all dried and in big containers. It was breathtaking, and not breathtaking like a sunset is, breathtaking in that it was difficult to breath. The smells would change from store to store, with about a dozen stores lining a single block. All I could think was, “I’m not going to be able to eat on this entire trip!” It smelled like fish, dried meat, sewage, stale bread…all combined into a stench that just overtook the city. And they changed, from one store to the next. The dried animals, sea animals, taking the space of so many stores, had me in awe. Where did they get the animals? How long did they last? Did they ever go bad? And mostly, did people actually eat this stuff? The stores were full of local people, all admiring and shopping with such consideration that I just knew this was what people in Hong Kong ate.

We continued to walk, on our way to the MTR (Mass Transit Rail) train station, and in that 10 minute walk, I already knew my Hong Kong trip would be life changing.